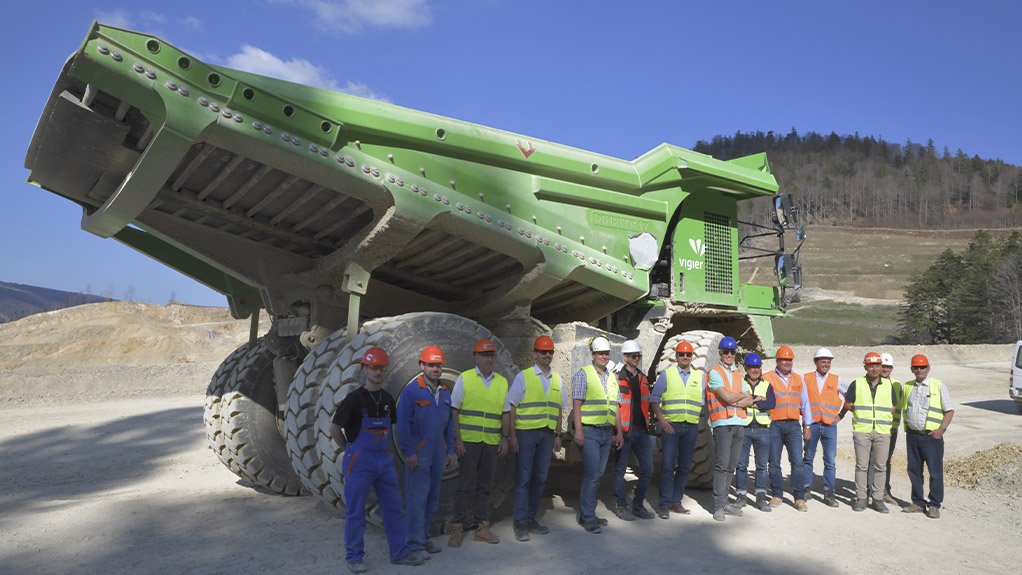 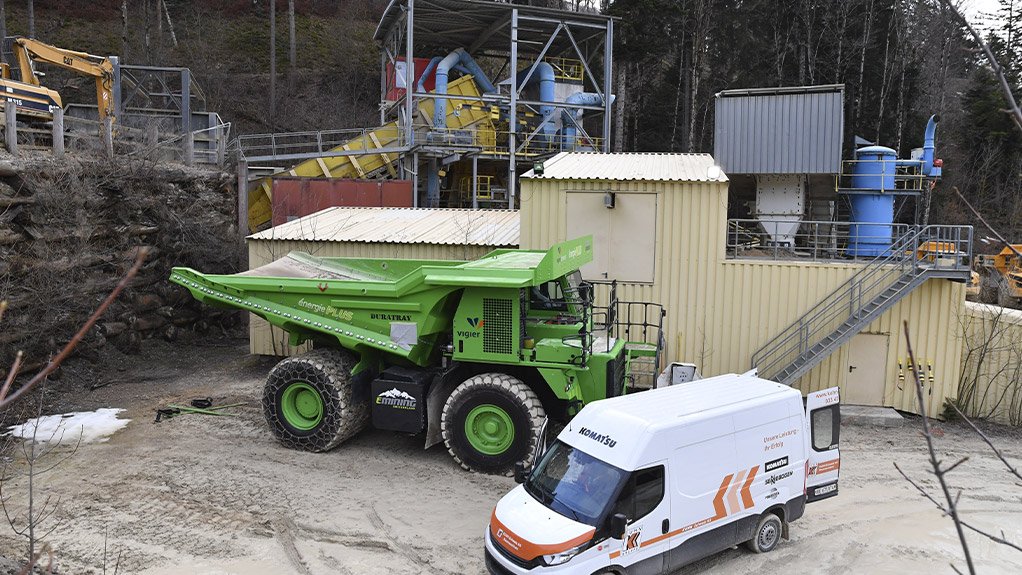 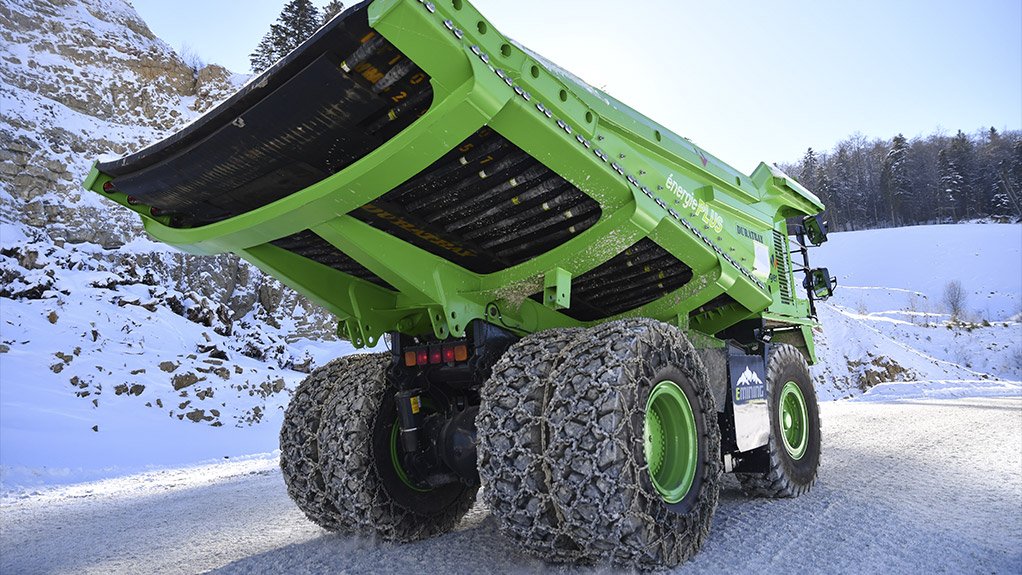 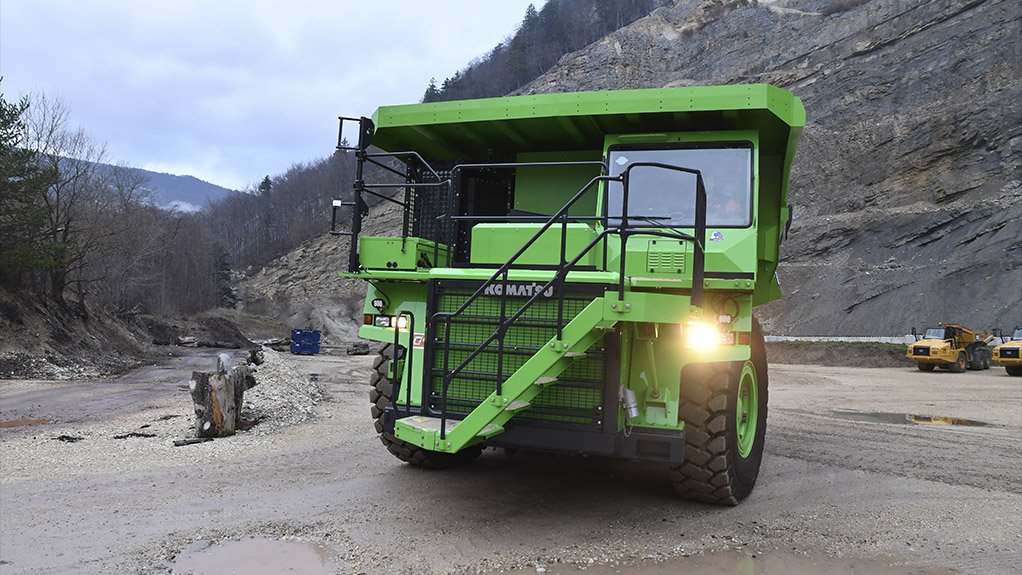 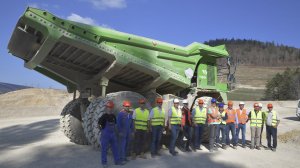 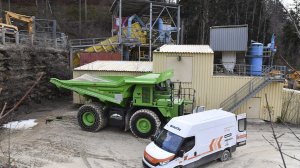 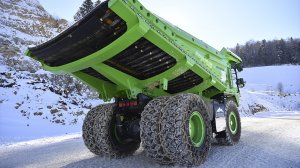 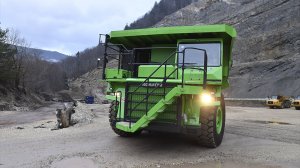 The eDumper at work in Biel, Siwtzerland

The prototype electric dumper (eDumper) is the brainchild of eMining, which is a subsidiary of Kuhn Switzerland.

The all-electric eDumper is powered by an 8 t, 700 kWh battery.

Energy recovered on the downhill (laden) run is stored in the batteries – through regenerative braking – and is used to power the uphill (unladen) run, eMining sales manager Gernot Beutle says in an interview.

Through regenerative braking, the truck saves 50 000 l of diesel a year, which equates to around 130 t of carbon emissions every year.

Beutle says the eDumper is already commercially available for duty anywhere in the world, by means of conversion kits.

The current eDumper is a conventional Komatsu dump truck that was converted into an electric vehicle.

“Since the projects are customised, we don’t have a general price for the conversion,” notes Beutle.

He says that the prototype has just passed 1 500 hours of operations in Switzerland without any problems.

In fact, he adds, “we are pleased to say that it is performing better than originally planned. Since we converted not only the drive, but also tweaked the complete vehicle, we were able to increase loading performance and velocity by more than 10%”.

Beutle says the payload of the vehicle remains the same as a dumper of equal size, despite the weight of the batteries, as eMining optimised the dumper’s body in order to achieve optimal load capacity.

“Considering a mixed topology with a higher percentage of downhill transport, operational costs can be up to 80% lower than when using comparable diesel-driven dump trucks,” he adds.

“Payback can be reached between five to ten years.

“The major maintenance, repair and operations costs on dump trucks are related to the diesel engine.”

But what about charging infrastructure and costs?

“It depends on the battery chemistry and the available infra-structure but, most of all, on road topology and conditions at the quarry,” states Beutle.

“In our case, sometimes the battery needs to be recharged only after three days. Recharging can take between one and eight hours depending on the capacity of the recharging station.”

“If the quarry has a design which amplifies the advantages of our technology, expensive infrastructure might not be needed.”

Beutle believes the time has arrived for EVs to take their rightful place in the mining industry.

Looking ahead, Beutle believes the eDumper will also find suitable applications in the construction industry.

“Over the next four years, we aim to convert higher payload dump trucks, improve our existing standard conversion-kits, expand our sales network and include autonomous driving into our scope. And, of course, we are looking into new battery concepts in order to increase our competitiveness.

“We are currently think about converting a 100 t payload vehicle, using different batteries.”