Canadian researchers study potential to lock carbon in mine waste

Canadian researchers study potential to lock carbon in mine waste 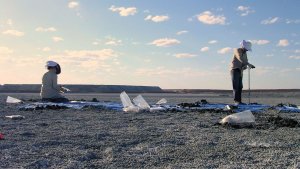 The technology, the UBC says, could drastically reduce the GHG emissions of mining operations and result in the world’s first GHG neutral mine.

The project – a collaboration between UBC, the University of Alberta, Trent University and Institut national de la recherche scientifique and three mining companies – heads to the field with a $2-million funding boost from Natural Resources Canada’s (NRCan) Clean Growth Program.

The funding was announced on Tuesday in Yellowknife, Northwest Territories, as part of the programme’s investments into clean technology research and development in the Canadian mining sector. The research is supported by an additional C$1.2-million in funding from global miner De Beers, FPX Nickel, Giga Metals and Geoscience BC and is supported by the governments of British Columbia, Yukon and Northwest Territories.

The field trials build on more than a decade of research and will focus on new technologies that maximise the reaction between CO2 and magnesium silicate-rich mine tailings, the waste from mining nickel, diamonds, platinum and other materials.

In a natural process called carbons, CO2 reacts with magnesium silicate and hydroxide minerals in tailings. The reaction traps the GHG into a solid, cement-like mineral, where it can remain in a benign state for thousands of years or more.

“We estimate that reacting just 10% of a mine’s waste stream could be more than enough to offset the annual carbon emissions produced by a mining operation,” says Greg Dipple, project lead and professor at the Bradshaw Research Initiative for Minerals and Mining at UBC.

The current scale of mining of commodities hosted in magnesium silicate rocks will be sufficient to trap between 100-million tons to 200-million tons of CO2 a year if all their waste streams are fully reacted, the UBC statement notes.

Besides capturing CO2, the process will also stabilise tailings piles and reduce the amount of dust generated on mine sites.

Field trials will take place at global miner De Beers' Gahcho Kué diamond mine, in Northwest Territories, in the coming months and at a prospective nickel mine, FPX Nickel's Decar project, in British Columbia next year.

“We’ve demonstrated rapid carbon fixation within days to weeks in the lab, but the challenge is to reproduce this success at large volumes,” says Dipple.

The funding from NRCan and industry partners will allow the research team to test these technologies at a larger scale at active mine sites.

“We are immensely proud of this collaborative piece of work between industry and academia, and with excellent progress in the project to date there is great potential to achieve carbon-neutral mining operations at sites where this type of rock is present. This award will help us accelerate this innovative work that could fundamentally change the carbon footprint of not only the diamond industry, but the mining sector more broadly,” says De Beers CEO Bruce Cleaver of the C$675 000 grant that the De Beers project received from NRCan.

The project that Geoscience BC is involved in will identify, map and analyse rocks to create a ‘carbon mineralisation potential index’ for British Columbia.

“With this generous funding from Geoscience BC we will, for the first time in the world, map out the carbon storage potential of serpentinite rock across an entire mountain chain. Serpentinite can be highly reactive to CO2 in air and occurs sporadically through much of British Columbia. The results will assist in the planning of future carbon capture and storage projects across the province,” says Dipple.

Identifying the distribution, abundances, geometries and quality of these ultramafic rocks is a first step towards quantifying the opportunity to capture GHGs.

“Our work will help to unlock the potential of these minerals as an effective resource for managing greenhouse gas emissions and will contribute to making Canada’s resource sector more environmentally and economically sustainable,” comments team member Sasha Wilson, associate professor and Canada Research Chair in Biogeochemistry of Sustainable Mineral Resources at the University of Alberta.

In the future, the team hopes to expand the technologies to include other types of rocks.