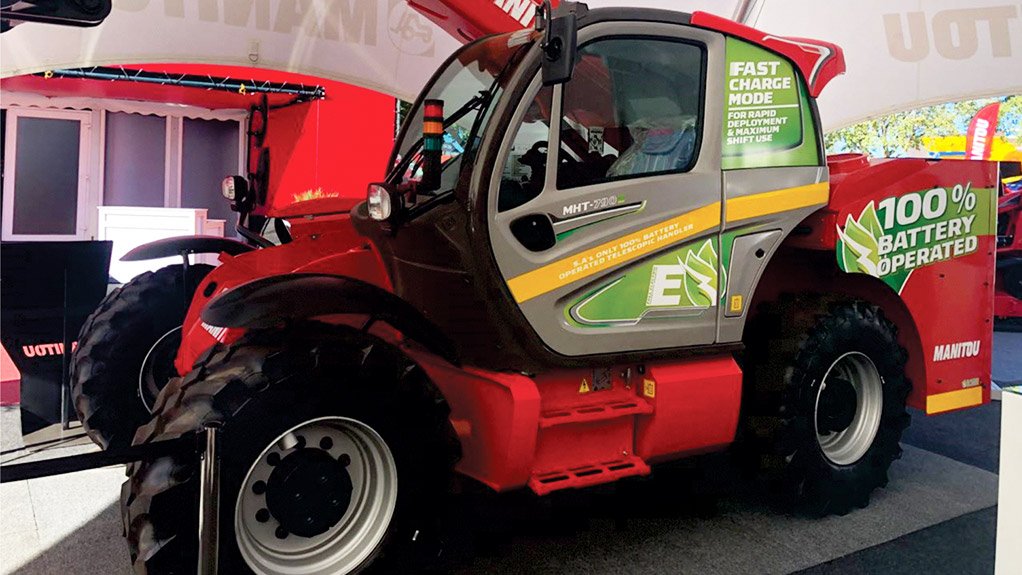 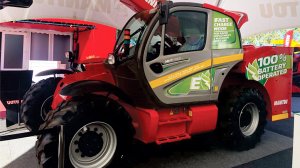 Manitou’s battery driven telehandler, the first of its kind, was unveiled at Electra Mining Africa 2018. BPI designed and implemented the conversion of the telehandler from a diesel driven system to a fully electric system using lithium-ion battery technology.

BPI MD Calvin Coetzee says the company was approached by mining infrastructure construction firm TDS Projects Construction to design an electrical system for the MHT-790E electric telescopic handler to address its need to eliminate fatigue in the mines associated with diesel particulate emissions, particularly in tight and closed-off areas. This is one of many common challenges facing the mining industry that BPI’s technology is able to address.

Coetzee explains that, in addition to emissions, the transporting of fuel to refuel diesel machines is also challenging in terms of time, cost and accessibility and can be solved by the switch from conventional diesel to electric systems.

“Electric machines and equipment can solve these problems without the loss of power or production time. All this is perfectly illustrated in the MHT-790E electric telescopic handler.”

The MHT-790E electric telescopic handler has a lifting capacity of up to 9 t and a lifting height of up to 6.84 m. The machine is powered by a lithium-iron phosphate (LiFePO4) battery, known to be one of the safest battery chemistry compositions for its thermal and chemical stability.

According to Coetzee, the additional advantages of using this type of battery include its low cost, non-toxicity, the natural abundance of iron, safety characteristics and electrochemical performance. He adds that in the MHT-790E electric telescopic handler, all these advantages culminate into a machine with zero emissions and far less heat being produced, which protects the health and safety of those working in confined areas such as tunnels and mines.

This was achieved with the machine’s built-in active air-cooling system which is completely sealed and cools the air down to keep the battery temperature at optimum levels, while the electric motor is cooled through a water cooling method. He states that this system is part of BPI’s ultrasafe design approach to all systems. Additional safety features built into the MHT-790E telehandler include various detection systems, ensuring that the vehicle slows down should a person, vehicle or obstacle be detected, thus reducing the possibility of accidents.

The battery pack included in the MHT-790E is also third generation impact rated, protecting it in the unlikely event of an accident. An automatic fire detection and suppression system specifically designed for lithium-ion battery systems also forms part of the system allowing for the detection and protection of any electrical sparks and smoke, or short circuit overload that may occur.

BPI’s main objective is to remove all emissions and harmful equipment from use in mining operations as part of its innovation-led approach to sustainable mining. This approach involves the application of cutting edge technology to address mining’s major challenges.

“We firmly believe that our designs are able to outperform traditional diesel-fuelled vehicles on the market and achieve considerable energy cost savings and lower overall machine costs. The launch of Manitou’s MHT-790E electric telehandler affords us the opportunity to have the return of investment on our electric vehicle systems field-proven,” Coetzee adds.

According to Manitou, the MHT-790E electric telehandler offers a return on investment over a short period of just two to four years. “Savings on fuel, possible fuel rebates and reduced maintenance costs, as opposed to maintenance on a diesel powered vehicle, all contribute to the cost effectiveness of the machine. The estimated running cost of the MHT-790E is 32% of a diesel equivalent which, combined with the multifunctionality of a telescopic handler and an array of available attachments, is a truly cost-effective solution for the mining and construction industries,” Manitou Southern Africa states.

BPI’s team was challenged with a turnaround time of just 3 months to complete the project – from conceptualisation through to design, procurement, manufacturing construction, assembly and finally commissioning. “The fact that the project was completed, successfully, within the time constraints is owing to the absolute commitment from all stakeholders and role-players involved,” says mechanical engineering head and lead on this project SP de Bruyn.

This includes the flexibility, technical capability and can-do attitude of Manitou Southern Africa and their aftermarket team, as well as the technical capabilities and expertise that the BPI team has built up over the last four years.

De Bruyn adds that the first MHT-790E electric telehandler was purchased by multidisciplinary service provider TDS Projects Construction who will be using it in their underground operations. TDS is committed to improving health and safety conditions in the workspace for their employees and this was its motivation for purchasing the vehicle.

Coetzee concludes that Manitou’s MHT-790E electric telehandler will be distributed through Manitou Southern Africa’s extensive network of 12 dealers throughout South Africa and neighbouring countries, and through the Manitou Centre in the Western Cape, where Manitou products are distributed and serviced.