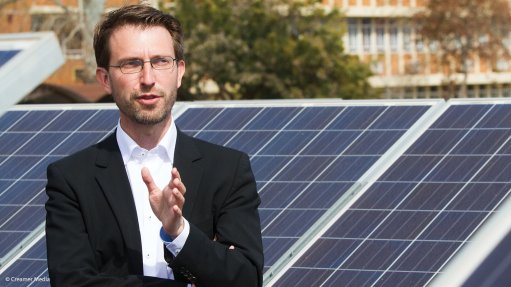 There has been much discussion in recent months about the work done by the Council for Scientific and Industrial Research Energy Centre into the role that renewable energy could play in South Africa’s future electricity mix. In an extensive interview with Engineering News Online, Dr Tobias Bischof-Niemz outlines the key findings of the research and unpacks the possible implications. The article follows:

The dramatic fall in the cost of supplying power from wind and solar photovoltaic (PV) plants has moved the global electricity supply industry beyond a critical “tipping point”, which leading energy scientist Dr Tobias Bischof-Niemz says is irreversibly altering the operating model, with significant implications for sun-drenched and wind-rich South Africa.

Instead of renewable energy playing only a modest and supportive role in the future supply mix, research conducted by the Council for Scientific and Industrial Research (CSIR) Energy Centre shows that, having the bulk of the country’s generation arising from wind and solar is not only technically feasibly, but also the lowest-cost option.

Until the large-scale global adoption of wind and solar PV, a phenomenon that has only really taken hold over the last ten years, generation technologies were not dispatched by nature. The objective was, thus, to use the assets as often as possible in order to reduce unit costs. Under such conditions, it made sense to first build baseload, such as coal and nuclear plants, and use these as much as possible, before deploying the more expensive mid-merit plants and the peakers, which acted as the ultimate safety net.

With the large-scale adoption of renewables (in 2015 a record 120 GW of wind and solar PV were added globally, more than any other technologies combined), the model is being turned on its head, particularly as costs have fallen, making them competitive when compared with alternative new-build options in many countries, including South Africa.

CSIR Energy Centre research goes so far as to suggest that it now makes sense, for cost reasons, to favour renewables generation over traditional baseload sources, and to supply any “residual” demand using “flexible” technologies able to respond to the demand profile created when the sun sets and/or the wind stops blowing.

This has been stress tested using a simulated time-synchronous model, integrating wind and solar data from the Wind Atlas South Africa and the Solar Radiation Data respectively. The outcome is reflective of South Africa’s impressive wind and solar resource base, with a capacity factor of 35% found to be achievable anywhere in the country – far superior to the 25% actually achieved in Spain and the 20% in Germany.

“On almost 70% of suitable land area in South Africa a 35% capacity factor or higher can be achieved,” Bischof-Niemz says, noting that a key finding is that South Africa’s wind resource is far better than first assumed.

“The wind resource in South Africa is actually on par with solar, with more than 80% of the country’s land mass having enough wind potential to achieve a 30% capacity factor or more. In addition, on a portfolio level, 15-minute gradients are very low, which makes the integration of wind power into the electricity system easier compared to countries with smaller interconnected areas. On average, wind power in South Africa is available around the clock, but with higher output in the evenings and at night.”

The unit’s research has gone further, though, testing the technical feasibility of supplying a theoretical baseload of 8 GW resulting in a yearly electricity demand of 70 TWh using a mix of solar PV (6 GW) and wind (16 GW), backed up by 8 GW of flexible power, which could be natural gas, biogas, coal, pumped hydro, hydro, concentrated solar power, or demand-side interventions. In such a mix, 83% of the total electricity demand is supplied by solar PV and wind, and the flexible power generators make up the 17% residual demand. The carbon dioxide emissions of this mix per kilowatt hour are only 10% of what a coal-fired power station would emit.

The economic feasibility, meanwhile, has been tested using the 69c/kWh achieved for wind in the fourth bid window of the Renewable Energy Independent Power Producer Procurement Programme (REIPPPP) and the 87c/kWh achieved for solar. The flexible solutions to fill the gaps are assumed, “pessimistically”, to carry a cost of 200c/kWh.

Bischof-Niemz notes that 200c/kWh for flexible generation is a “worst-case” assumption, as is the assumption that any excess energy produced when solar PV and wind supply more than the assumed load is simply discarded and, thus, has no economic value.

The outcome shows that it is technically feasible for such a 30 GW mix to supply the 8 GW baseload in as reliable a manner as conventional baseload generators, while the economic analysis suggests that such a mix will deliver electricity at a blended cost of 100c/kWh. “Does it make sense to supply 8 GW baseload with an installed capacity of 30 GW? Yes, because it’s about energy, not capacity,” Bischof-Niemz avers.

In reality, customer demand is never “pure baseload”. The CSIR unit has, therefore, also extended the model to the supply of the actual South African electricity-demand profile  – picking up in the morning, varying throughout the day, peaking in the evening and then falling again. This modelling is scaled to a 40 GW peak demand, or 261 TWh a year, which is about 10% more than South Africa’s current demand. Using the same cost assumptions, the 100c/kWh outcome is sustained, as is the technical feasibility.

“So now the cost-optimal mix is a completely different mix than was traditionally the case,” Bischof-Niemz explains.

The competitiveness of wind and solar PV, he adds, is likely to continue to improve, owing to the fact that the costs of the technologies are derived from manufacturing processes that are being continuously improved as production is upscaled. By contrast, traditional fossil-fuel plants rely on finite fossil resources, where it becomes increasingly expensive as more primary energy is consumed.

However, what does the research mean for South Africa’s real-world electricity supply industry, where the contestation of ideas and technologies has never been more robust?

For Bischof-Niemz it means that energy planners can move with greater confidence in factoring in higher levels of renewables in the generation plan, as the model proves that the resources have the technical wherewithal to meet demand, while the tariffs achieved through the REIPPPP underpin their financial robustness.

“It does require an acknowledgment that wind and solar PV have now passed a cost-competitiveness tipping point. Once one accepts that, things become far less complicated.”

The issue then is for South African planners to set targets for the transition from the current coal-heavy mix, where conventional baseload generation remains the most cost optimal, to one that relies increasingly on renewables, supported by flexible load-followers.

That is likely to translate into far higher allocations of wind and solar PV than is currently the case in the Integrated Resource Plan, which, in turn, could have material industrial policy implications.

The CSIR unit is aiming to add further evidence for its thesis by implementing what has been dubbed CSIR’s ‘Energy-Autonomous Campus’, which is being rolled out across the science council’s 170 ha complex in Pretoria and all CSIR sites in the country. Interestingly, Eskom is a partner in this endeavour.

It has already invested in a 558 kW ground-mounted solar PV plant and is currently adding two more facilities with a combined 450 kW. It has plans for the large-scale deployment of roof-top solar across many of the 52 buildings on site, as well as a wind turbine and a biogas plant, using municipal waste.

Ultimately, the expectation is that the CSIR will meet its full 30 GWh-a-year demand and have surplus energy to balance load at other CSIR sites in a ‘virtual power plant”, to fuel a fleet of electric cars, as well as to produce hydrogen for mobile and stationary fuel-cell applications.

“Our vision is having a real-world research platform for cost-efficient future energy systems based on renewables,” Bischof-Niemz concludes.