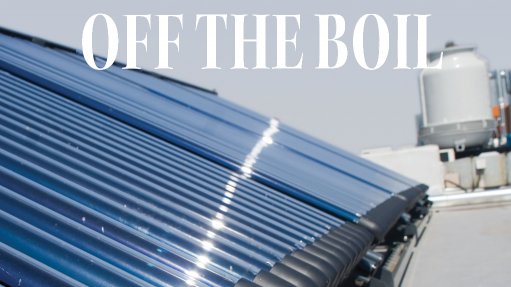 The programme was launched in 2008 to help mitigate energy system constraints by installing a million solar geysers in homes across the country by 2013. However, the programme has since only managed to roll out about 424 790 solar geysers.

Initially administered by State-owned electricity utility Eskom, the utility withdrew from the programme in January to focus on its main business: the supply electricity.

The funding and implementation of the SWH programme – encompassing both high- and low-pressure (LP) solar water heating systems – are now being managed by the Department of Energy (DoE). However, Eskom accepted high-pressure rebate claims on high-pressure SWH systems installed before and up to April 30, 2015, through the Eskom rebate process.

The DoE released a statement in February, notifying stakeholders of updates to transitional arrangements after the programme had been handed over to the DoE in January by Eskom. The DoE said the rebate scheme would be reintroduced and that subsidies would be offered with considerations regarding local content.

However, the DoE informed Parliament in March that the programme had been “frozen”, owing to the poor quality of installation and unreliable verification of the number and location of the installed systems.

The uncertainty surrounding the future of the programme and its funding has lingered, with the opposition Democratic Alliance (DA) and the Sustainable Energy Society of Southern Africa (Sessa) both arguing that lack of communication is harming the industry, while undermining employment and manufacturing opportunities.

The lack of communication extended to Engineering News, which failed to receive a response from the DoE, having submitted several questions to the department regarding the status and future of the SWH rebate programme.

Sessa estimates that about 4 500 jobs have been lost in installation and manufacturing, and, with the cessation of all rebates, a further 1 500 jobs are likely to be lost.

DA shadow Energy Minister and MP Gordon Mackay says the potential impact on those hoping for a rebate is uncertain.

Further, he says industry has indicated that potentially 50% of manufacturers in the SWH sector might shut down as a result of the ongoing uncertainty, which has undermined consumer confidence in the programme and will damage any future attempts at another roll-out, he predicts.

Mackay tells Engineering News that he has written extensively to Energy Minister Tina Joemat-Pettersson on the state of the programme and also posed questions to her during a question session in the National Assembly last month.

He pointed out during the session that the Minister’s “diddling” had cost the country a significant number of jobs and had also resulted in the closure of numerous small and medium-sized enterprises (SMEs).

He challenged the Minister on how the DoE would regain the confidence of investors and businesses and how she would ensure that the much-needed programme, which had the potential to significantly decrease the pressure on the constrained energy grid, was reintroduced.

Joemat-Pettersson replied that the various energy programmes, including the independent power producer programme, as well as the solar, wind and cogeneration energy programmes, had generated significant confidence from the business sector.

“It is that same business sector that is involved in solar water heaters and we are working on addressing this model. SMEs are concerned about how the solar water heater model functions in terms of the maintenance of the water heater and the installation. Many people were convinced that the model had to be changed and so we have changed it,” she said.

Eskom Withdrawal
Eskom’s website notes that a future solar programme will be announced by DoE and no new suppliers or installers will be registered on the programme by Eskom until then.

Mackay says, since the transfer of the programme, the DoE has failed to present docu- mentation to the Portfolio Committee on Energy indicating its intentions regarding the programme.

“As an energy efficiency programme, this has been a complete failure. The programme has subsequently been used to fund the delivery of about 417 700 solar geysers to communities who are not on the grid . . . the supply of these geysers did very little to achieve the energy efficiency aims of the programme.”

According to Mackay, the DoE has abandoned the one-million solar water heater installation target and has settled for installing 485 000 water-heating units in the residential and commercial sectors, which are connected to the grid, during the 2014/15 financial year.

He says it is the DA’s belief that the one-million target could have been reached, had the programme functioned effectively from the start.

The way in which the SWH programme – which relies on Eskom and local municipalities as the key drivers – was implemented was perhaps the biggest impediment to the effective roll-out of the programme, he says.

If the DoE wants to reach its newly revised target, a substantial rework of the programme will be necessary, starting with identifying an appropriate, implementing partner, preferably from the private sector, suggests Mackay.

It is important that the DoE engage an implementing partner that can effectively be “fired” if it fails to meet the targets set, he says, adding that this was not possible in the case of Eskom, and that this lack of accountability lies at the heart of the failure of that programme.

“This state of affairs must not be allowed to negatively affect an entire industry, threaten jobs and . . . the livelihoods of those most in need of support. We need a proper government plan for solar water heaters that can urgently reduce demand on the grid and provide certainty for the industry so that it can flourish and provide much-needed jobs,” Mackay says.

Green adds that if the Preferential Procure- ment Policy Framework Act (PPPFA) rules had been amended to stipulate 70% overall local content, the one-million target would have been attainable.

He explains that the Department of Trade and Industry (DTI) advised the National Treasury on the PPPFA rules, where the overall objective of 70% local content was set for the SWH programme.

However, Green says the DTI and the National Treasury decided to designate two specific components, the tank and the solar collector, at 70% local content each.

Although there were ten local-content manu- facturers of LP SWH systems approved by the South African Bureau of Standards, all of which exceeded the 70% overall local-content objective on value, the solar collectors used evacuated tubes, which cannot be made in South Africa and are imported.

Consequently, such products were disqualified, despite previously having qualified for local content under the Eskom SWH LP system rebate programme.

“Despite constant representations to the DTI by manufacturers and Sessa to revise the PPPFA rules, the DTI has refused to back down,” Green says.

He adds that, with only one job created in manufacturing for every five in installation, servicing and maintenance, the “misguided or badly drafted” PPPFA rules by the DTI resulted in the total collapse of the LP SWH industry, with hundreds of installers going into liquidation, job losses and manufacturers having lost money and investments because of redundant equipment.

Green says the rules guiding the installation of solar water heaters need serious revision, as the problems of the LP SWH programme were predominately attributable to low standards of installation.

He agrees with Mackay that the failure of the programme is as a result of bad management practice by Eskom and its lack of accountability.

“SWH uptake by consumers is likely to remain lacklustre for several years, unless incentives are reintroduced and at levels that compare with Eskom’s coal-generation cost, which will result in SWH installations growing almost exponentially. However, with no rebates, the yearly number of installations will be in the low thousands,” says Green.

The programme has raised awareness of SWH and endorsed the technology, with the reduced prices of solar water heaters, owing to the rebates, an incentive for the public to buy these systems.

However, since the suspension of the programme, WaterLite’s potential investor and partner have lost confidence in the programme and in the country, says Van der Vyver.

This has resulted in the company having shelved its larger-scale expansion plans. However, manufacturing demand for solar water heaters has been created and he says the company has a group of loyal customers.

Meanwhile, Van der Vyver points out that the SWH programme needs direction regarding its future, and that “some intelligent technical ears” are needed.

“According to Joemat-Pettersson, the energy savings have not yet been evaluated. If this is the case, it is a clear indication that Eskom was incompetent.”

Mackay agrees that the programme redesign to focus on localisation is a positive move by the DoE, noting that the department is aiming to increase targets in this regard and to enforce localisation targets.

“Closer scrutiny by the DoE may also improve the overall quality of the units, but whether the DoE has the capacity for such scrutiny is open to debate.”