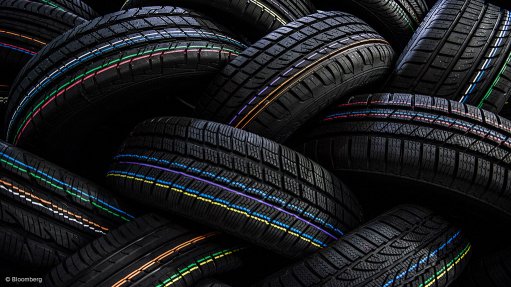 While tyre exports have assisted South Africa in maintaining its tyre factories’ production levels over the past ten years, the industry’s production levels are well below the maximum 18-million tyres a year that the factories are capable of producing, notes industry body the South African Tyre Manufacturers Conference (SATMC).

SATMC CEO Dr Etienne Human tells Engineering News that the continued increase in cheap tyre imports from countries in the Far East, through customs under- declarations, is also a consistent cause for concern for local tyre manufacturers.

“Local lack of service delivery, steep increases in electricity costs and an alarming rise in the use of unsafe second-hand tyres have further contributed to the recurring challenges faced by the tyre manufacturing industry,” stresses Human.

Human highlights South Africa’s electricity crisis as one of the key concerns for the rubber industry.

“Although local tyre manufacturers continuously invest in plants and upgrades to ensure that they have the latest and most efficient technology at hand, the plants are still 100% dependent on electricity 24 hours a day, and manufacturers require a stable and economical supply to operate their plants on a continuous basis.”

Human adds that the price of electricity has increased by more than 170% in the past decade, while new increases of 16% a year over the next five years will add another 110% to the cost. These increases are exacerbated by the municipalities that add significant margins – up to 500% – to the electricity they buy from State-owned power utility Eskom.

The SATMC has made recommendations to the National Energy Regulator of South Africa through its public participation programme, to limit power price increases to the consumer price index. The SATMC has also requested that Eskom become more efficient and allow for private enterprises to cogenerate power.

“While our industry understands how serious the electricity issue is for the country, we have to take appropriate action regarding the management of this cost in our respective companies. We must also employ a cooperative approach to ensure we survive this tough period, regarding not only Eskom but also the local authorities,” Human elaborates.

“Meanwhile, with South Africa now being grouped in the lower quartile of tyre production costs for each ton of rubber in the world, the Eastern European and East Asian countries are making big inroads into the South African market,” he says.

A total of 7.8-million tyres, valued at more than R7.36-billion, were imported into South Africa in 2013. “As a result, the industry has not expanded through new- tyre sales, with the market share of other imported tyres from other importers having grown overall by more than 50% over the past five years,” says Human, adding that the truck tyres market has been affected the most by low-cost imported tyres.

Compounding these challenges is the cumulative effect of the industry becoming less competitive over the past years, says Human, citing as an example closures in the industry, which he believes are likely to follow the lack of competitiveness. He highlights that 600 employees from truck tyre manufacturer Apollo Tyres’ Durban plant were retrenched in December 2014.

Meanwhile, Human highlights a survey conducted by Sumitomo Rubber South Africa last year, which involved the inspection of 275 second-hand tyres destined to be sold to the public. The survey found that 53% of these tyres were either damaged beyond repair or had gone below the minimum tread depth required by law.

He points out that, while it is not illegal to sell the tyres, it is illegal to fit them to a car, which makes regulating this issue difficult. Human notes that the SATMC is working with the South African Bureau of Standards (SABS) to determine a minimum standard for partially worn tyres.

He further believes that the National Regulator for Compulsory Specifications should not allow tyres of inferior quality to be made available on the South African market and suggests that a testing laboratory be erected by the SABS to sample and test all the types of tyres sold in the country.