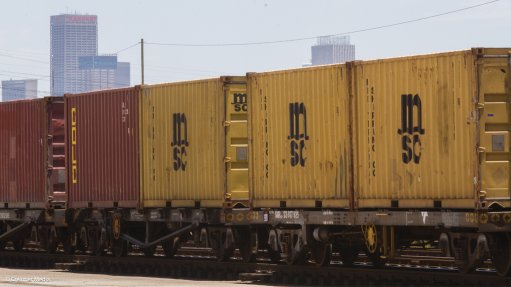 Six slots are being sold on the container corridor from Durban to the City Deep inland terminal pictured here
Photo by: Creamer Media

State-owned freight logistics group Transnet has officially launched the much-anticipated bidding process for 16 rail slots, which will be sold to third-party operators for a period of two years on a take-or-pay basis.

A bid submission date of May 31 has been set and Transnet expects to announce winning bidders on June 30.

Successful bidders would then need to secure an operating licence from the Rail Safety Regulator and Transnet is optimistic that the first third-party operators should be able to begin moving cargo by October.

Six slots have been advertised on the underperforming container corridor between Durban and City Deep, while a further ten slots are being made available on the ‘southern corridor’ to East London, in the Eastern Cape, including two slots that could open rail access for automotive cargoes to and from Pretoria, in Gauteng.

Besides container and automotive freight, Transnet expects the other slots to be filled mainly by operators that have access to agricultural cargoes.

Within the 16-slot allocation, various slot configurations will be considered, including assigning some of the container slots to agriculture cargoes arising from Bethlehem, in the Free State, or from Polokwane, in the Limpopo province.

CEO Portia Derby stresses that the slots will be sold on a ‘Voetstoots’ basis, implying that the third-party operators will have to accept the current state and performance of the network, which is being seriously disrupted by ongoing theft and vandalism, including large-scale cable theft.

She says a key objective is to fix the infrastructure, which remains the responsibility of Transnet Freight Rail (TFR), and to elevate it to a level where the number of slots can be increased in future.

High levels of theft and vandalism on the Durban-to-City Deep corridor have increase running times to an average of 36 hours, as opposed the corridor’s original 18-hour design.

Any reduction in operating hours will increase the number of slots available for both TFR, which will remain the dominant operator on the rail network, and third-party operators.

Derby also sees the slot-sale process as an opportunity to enter into a deeper collaboration with the private sector to improve safety and security on the container corridor, in line with the partnering success the utility is currently enjoying on the coal corridor from Mpumalanga to Richards Bay.

In preparation for the slot sale, TFR has ringfenced its railway infrastructure management from rail operations. Nevertheless, TFR remains a vertically integrated business and has also retained ‘grandfather rights’ on all current slots.

TRF will also review slot uptake on a quarterly basis and could consider readvertising a slot if a private train operator company consistently falls short of the 75% utilisation target set for each slot.

TFR CEO Sizakele Mzimela reports that slot pricing will be communicated at a stakeholder engagement session to be held on April 8, but indicates that these will be favourable to operators and will include a subsidy component.

The decision to subsidise the initial operators has been made to incentivise uptake in a way that meets the objective of corridor “densification” and the migration of freight cargo from road to rail.

Mzimela says that the State-owned entity is hoping to attract operators with access to locomotives and wagons, but that Transnet will also entertain solutions that involve the use of TFR rolling stock.

She is optimistic, however, that the slot-sale process will attract logistics companies with access to cargoes, rolling stock and warehouses.

Public Enterprises Minister Pravin Gordhan says the slot sales have been aligned with the structural reform efforts being driven under Operation Vulindlela, which is a joint initiative of the Presidency and the National Treasury.

He adds that the objective is to improve freight logistics efficiency and reduce the cost of doing business in South Africa.