The sky’s the limit with thermal spray coatings from Thermaspray 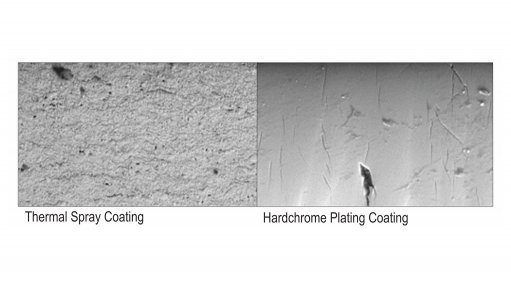 During landing and taxiing, an aircraft’s landing gear is subjected to a great deal of stress, side-loading and sliding wear. Any coatings applied to protect these large hydraulic units from wear resistance and corrosion must be of first-class standards to be able to withstand these stresses. Until recently, electrolytically deposited chrome plating was the standard surface treatment for landing gear components which are critical safety components on an aircafrt.

According to Metallurgical Engineer at Thermaspray, Shaik Hoosain, hard chromium coatings have been the gold standard to impart resistance to component wear, impact and corrosion in aviation, transportation, industrial and consumer products for more than 70 years. “While chrome has proven to be a relatively cheap and effective solution,  chrome plated components are typically plagued by a debit in fatigue performance, detrimental mud cracking surface pattern, susceptibility to scoring, wear, and seal leakage. As these performance limitations are safety critical issues, environmental legislation has, not surprisingly, forced the aerospace industry to design the next generation of aircraft to be ‘hard chrome plating free’. The engineering community in both the military and civilian aerospace sectors, as well as in many industrial sectors, have been searching for better coating materials to replace electrolytically deposited chrome plating as well as for more cost-effective application methods.

Thermal sprayed carbide based materials are commonly used for their exceptional hardness and have been employed for the surface treatments of parts that require a hard surface in wear interfaces. Chromium carbides are hard and their general use is to provide hard, wear and corrosion resistant coatings on parts that need to be protected. Chromium carbide-based coatings also do not suffer from effluent disposal problems. “They are therefore finding increasing use at the expense of hard chrome plating particularly where wear and corrosion resistance is important or if a thick coating is required on a large part,” affirms Hoosain.

According to Hoosain, thermal spray coatings are also significantly denser than chrome plated coatings. “The chrome plated micro-layer is filled with micro-cracks which allow corrosive agents with high or low pH to penetrate the coating and attack the substrate. If the substrate is ferrous, it can lead to severe corrosion of the substrate and ultimately coating failure. In addition, the thermal spray process is more versatile in terms of the type of coatings that can be applied compared to the hard chrome plating process which is limited to only one type of coating. “

HVOF thermal spray coatings eliminate all environmental issues and health concerns associated with electroplated hard chrome coatings as the hard chrome process has a significant negative environmental impact. Disposal of manufacturing wastes and by-products into uncontrolled surroundings and the subsequent health and environmental effects have been well documented and has resulted in hard chrome plating materials such as hexavalent chromium to be highly regulated and in some cases even banned (Europe and USA).

Thermal spray coatings such as HVOF are an innovative, environmentally friendly, versatile and cost effective solution for high stress applications that require protection against wear and corrosion.