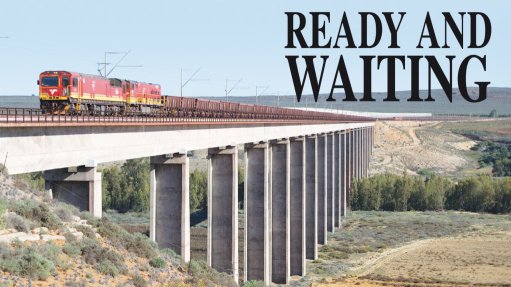 Despite being at the mercy of economic uncertainty, compounded by sometimes heavily fluctuating commodity prices, State-owned rail transport company Transnet Freight Rail (TFR) has identified itself as a key economic enabler that aims to boost the South African economy by trying to unlock areas of potential in support of domestic and export markets, while waiting in the wings for an uptick in the mining sector.

“We are supporting the country’s rail logistics customers by ensuring that we improve efficiencies and concentrate on optimising the entire value chain,” notes TFR capital planning GM Brian Monakali in an interview with Mining Weekly. He makes it clear that the rail utility is poised for growth and ready to serve its clients, which include the mining industry, by pacing rail capacity expansion in line with market demand.

The current economic downturn, especially in terms of its effect on the mining industry, has, however, impacted significantly on TFR’s bottom line, as much of the utility’s funding depends on mining forecasts, Monakali explains. This even prompted parent company Transnet to review downwards its capital expenditure for the group’s rolling seven- year market demand strategy, or MDS.

“When the bulk commodities from the mines are affected in terms of growth prospects, so are we, as the mines’ financial success is also used to support our funding requests. If one suffers, so does the other,” notes Monakali, the newly elected chairperson of the International Heavy Haul Association.

“Rail logistics is one of the biggest costs to our customers, including the miners. We need to always ensure that we provide rail solutions safely and at the lowest possible price,” he says, adding that TFR is working on the right solutions – such as applying heavy-haul operating and maintenance principles to general freight rail lines to improve efficiencies and counter lost profitability, which will benefit Transnet and the mining sector.

Implementing the successes of heavy-haul best practice, such as running longer trains and refurbishing lines to take on heavier loads, will reduce unit transport costs and ensure that rail logistics becomes more affordable for TFR’s clients, he adds.

TFR is also working on upgrading the existing bulk freight line, which predominantly transports coal from the Waterberg, in Limpopo, and chrome and ferrochrome from Rustenburg for export from the Richards Bay Coal Terminal (RBCT), in KwaZulu-Natal. The upgrade of this line includes adding new crossing loops to allow more trains to run simultaneously on the line. This will ensure that the utility meets any short- to medium-term demand growth. The existing rail line capacity is being upgraded to around 24-million tons a year from the current capacity of about two-million tons a year.

In the long term, however, TFR aims to add rail capacity to prepare for times when mines will need to transport more than 24-million tons a year. Thus, the utility is conducting a prefeasibility study and extending the existing coal heavy-haul export line, which currently runs from Mpumalanga to Richards Bay, to Lephalale, in the Waterberg region. These plans are aimed at unlocking the coal-rich Waterberg region to ensure that South Africa continues to supply enough coal to meet demand, as coal reserves in Mpumalanga are expected to flatten in the long term.

“The miners are already in the Waterberg region and they need support from us. So, we’ve come to the party and are determined to provide logistical solutions to enable them to transport coal from the region for local consumption and for export,” says Monakali.

TFR also aims to promote intraregional trade between South Africa and Botswana by extending its rail capacity from Lephalale to Botswana through the establishment of a new heavy-haul line, currently at prefeasibility stage, from Botswana to the RBCT or to the Port of Maputo, in Mozambique.

Monakali tells Mining Weekly that the South African and Botswana governments have signed a bilateral agreement that confirms their buy-in to collaborate on the development of infrastructure solutions. He adds that the pace of developing the projects will be determined by market demand.

Swaziland Rail Link Further cementing its aim to promote intraregional rail integration, TFR and Swaziland Railway are seeking funding to develop the Swaziland Rail Link at a cost of about R19-billion, including contingencies. The 150 km rail line will divert general freight, including chrome and ferrochrome, away from the existing coal heavy-haul export line. This new rail line will run from Lothair, in Mpumalanga, through Sidvokodvo, in Swaziland, to the Transnet port terminal in Richards Bay. The link will also provide a new rail route to the Port of Maputo.

Monakali further confirms that, in simple terms, Transnet plans to dedicate the existing heavy-haul line from Mpumalanga to the RBCT for coal export. Chrome and ferrochrome, among other general freight, will be diverted through the Swaziland Rail Link line to Richards Bay or Maputo. The new route will, therefore, be considered a dedicated general freight business line.

Once off the ground, the Swaziland Rail Link project will create about 8 000 jobs during the construction phase and about R2-billion will be spent on social development, Monakali adds.

South African Chamber of Mines chief economist Henk Langenhoven tells Mining Weekly that Transnet’s drive for intraregional trade “could only be positive”, with direct and indirect positive spin-offs for the local economy.

“Transnet is doing a great job of balancing expected demand for its services and investment in its capacity, especially considering that the rail utility’s response is premised on what happens with the commodity on its corridors,” he says.

Key Commodities Owing to persistent demand, as a result of the region’s dependence on coal-fired electricity, coal remains a key focus for TFR, while iron-ore, its other key commodity, takes a backseat following a dip in the market.

The price of manganese, however, is faring well, which means that manganese exports are increasing. As such, manganese is becoming an important source of income for TFR, according to Langenhoven.

He tells Mining Weekly that South Africa, which accounts for about 78% of the world’s identified manganese resources – for which there is no substitute – is the world’s leading manganese producer, having produced about 13.7-million tonnes in 2016.

Most of the manganese produced locally is exported.

“An upward spike [in the price of manganese] at the beginning of 2016 was clearly the impetus for [increased] exports,” notes Langenhoven.

According to Monakali, TFR has responded to the promising manganese price with plans to upgrade the manganese export line (currently in the construction phase), which runs from Hotazel, in the Northern Cape, to Coega, in the Eastern Cape. Ultimately, the existing line will be upgraded to heavy-haul standards, expanding rail capacity to about 22-million tons a year.

“We’re pacing construction of this project in line with market demand and, therefore, developing it modularly in stages. As demand increases, so will rail capacity,” says Monakali.

Road to Rail Besides taking advantage of the recovery in demand for commodities such as manganese, he says, TFR is focused on the potential growth that could come from transporting more rail-friendly freight currently being transported by road.

“Most of our rail-friendly freight is being transported by road, which is unsafe, uneconomical and unsustainable. This is, therefore, one of our biggest areas of growth opportunity. It is low-hanging fruit for us,” he concludes.