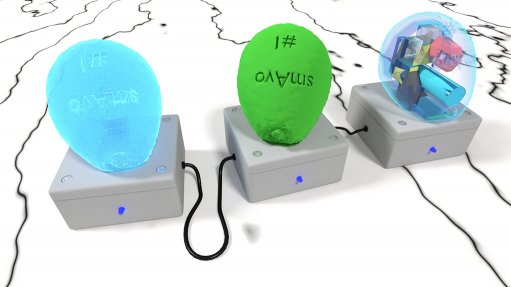 A digital rendering of UP’s smAvo enclosures and electronic components

Scientists at the University of Pretoria’s (UP’s) Engineering 4.0 research facility are tracking the journey of 3D-printed avocado-shaped sensors on a ship from South Africa to the Netherlands. The so-called smAvos are part of a research project to determine damage to fresh produce while transported from producers to supermarkets.

“This is a flagship project of Engineering 4.0 which focuses on smart transport, infrastructure and cities. The researchers have made use of the department’s unique smAvo and smaTo sensor platforms, which are used to monitor the entire value chain, from farm to fork,” explained Department of Civil Engineering in the Faculty of Engineering, Built Environment and Information Technology head Professor Wynand Steyn.

According to Steyn, many producers in South Africa face the challenge of ensuring that agricultural products intended for the export market arrive at their destination unblemished and are suitable for further distribution and sale.

To determine damage to transported avocados, UP researchers developed a concept known as civiltronics, which is a combination of traditional civil engineering, electronics, the Internet of Things (IoT), programming, computer science and additive manufacturing, or 3D printing. The project involves monitoring a consignment of avocados being transported by cargo ship to Rotterdam, Netherlands and then on to other destinations in the European Union.

“The avocados are 3D-printed with microsensors that send data back to UP’s Engineering 4.0 research facility, tracking the effects of accelerations in speed, rotational movements of the ship and temperature, as well as other elements of the ship’s behaviour, to determine whether this impacted on the produce itself and the condition in which it arrived at its destination.”

To optimise the data recorded during the transportation of the avocados, the team developed a measuring instrument with microsensors embedded in a number of 3D-printed avocados with a soft water-resistant outer covering that would be exposed to the same conditions as the real produce surrounding them. The instrument was developed from off-the-shelf components and microcontrollers and was programmed and customised to ensure that live, real-time data could be collected and stored for analysis.

“If you can’t measure the damage, you can’t manage it,” said UP PhD student and team member André Broekman. “Real-time data on the ship’s location in the Atlantic Ocean, as well as weather conditions throughout the trip, is being sent to the university’s researchers at Engineering 4.0, where all the data will be captured on the department’s central platform for analysis, interpretation and the recommendation of future action,” he explained.

This data will later be linked to satellite-acquired maritime data such as the height of the waves, wind speed and the direction in which the ship is travelling. “This information is not just of value to producers to ensure that they can obtain top prices for South Africa’s best products, but also to avoid additional costs related to transporting products that have been damaged or are no longer suitable for trade in the export market back to South Africa,” he said.

The data could help to identify weak links in the logistics chain, where damage may occur and also help to eliminate events that may cause damage to transported produce.