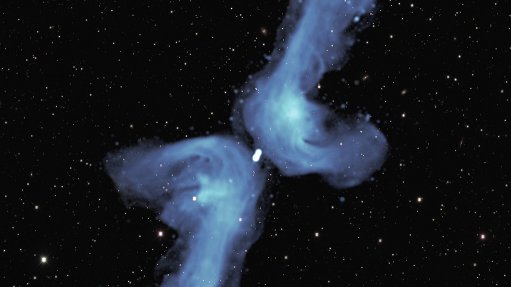 MeerKAT image of the galaxy PKS 2014-55
Photo by: NRAO/SARAO

Many galaxies in the known universe are characterised by huge twin radiowave emitting jets streaking out from their centres, deep into intergalactic space. There are usually two of these jets, heading in opposite directions, originating at the massive black holes that exist in the centres of these galaxies.

But a few galaxies have what appear to be four jets, forming roughly an X-shape on radio astronomical images. What caused this phenomenon has long been a puzzle. But observations from South Africa’s MeerKAT radio telescope array have strongly suggested the explanation.

But high-quality imaging by MeerKAT has given strong support to the third theory. This was that material falling back into the galaxy was being deflected into different directions, thereby forming the other two arms of the X seen in the imagery.

MeerKAT was used to acquire data about the X-galaxy PKS 2014-55. The resulting imagery shows material, originally expelled from the galaxy, turning and flowing back to the galaxy, under pressure from the tenuous intergalactic gases. As the material falls back into the galaxy, it encounters the higher gas pressure within the galaxy and is deflected into new directions.

The research was carried out by a joint US-South African team, from the South African Radio Astronomy Observatory, the US National Radio Astronomy Observatory (NRAO), the University of Pretoria and Rhodes University. It was the high quality of the imaging made possible by MeerKAT, an array of 64 dishes in the Karoo region in the Northern Cape province, that allowed the breakthrough to be made. The MeerKAT array is equivalent to a single radio telescope dish with a diameter of 8 km.

“MeerKAT is one of a new generation of instruments whose power solves old puzzles even as it finds new ones – this galaxy shows features never seen before in this detail which are not fully understood,” highlights NRAO astronomer and study lead author William Cotton. Former SKA South Africa director and study co-author Bernie Fanaroff enthuses that “MeerKAT was designed to be the best of its kind in the world. It’s wonderful to see how its unique capabilities are contributing to resolving longstanding questions related to the evolution of galaxies.”