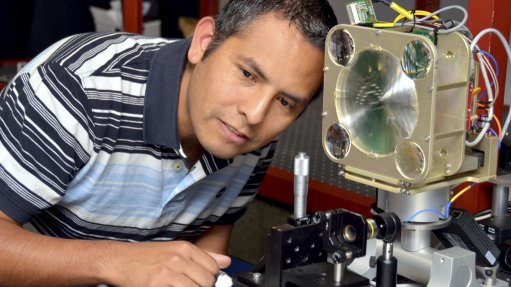 Researchers from the University of the Witwatersrand (Wits) and the Council for Scientific and Industrial Research (CSIR) have published their findings in a study that shows it is possible to increase bandwidth using the patterns of light used in optical communications links.

The researchers, who were looking at alternative technology sources to traditional optical communications systems in the event that they fail, published the findings on the scientific journal Nature’s website on Friday.

The research team from South Africa, working in collaboration with researchers from Tunisia, demonstrated that more than 100 patterns of light used in an optical communication link could potentially be used to increase the bandwidth of communications systems by 100 times.

Traditional optical communication systems modulate the amplitude, phase, polarisation, colour and frequency of the light that is transmitted. Yet, despite these technologies, it was expected that a bandwidth ceiling would be reached in the near future.

However, light also had a “pattern” regarding the intensity distribution of the light, or rather how it looked on a camera or a screen.

It was possible to increase bandwidth by increasing the number of light patterns used. Ten light patterns would result in a ten times increase in existing bandwidth, as ten new channels would emerge for data transfer.

Currently, modern optical communication systems only used one pattern, owing to technical hurdles in packing information into these patterns of light and, subsequently, getting the information back out again.

In this latest work, the research team showed data transmission with over 100 patterns of light, exploiting three degrees of freedom in the process.

They used digital holograms written to a small liquid crystal display and showed that it was possible to have a hologram encoded with over 100 patterns in multiple colours.

“This is the highest number of patterns created and detected on such a device, to date, far exceeding the previous state-of-the-art [technology],” said Forbes.

One of the novel steps was to make the device “colour blind”, so the same holograms can be used to encode many wavelengths.

Rosales-Guzman explained that, to make this work, “100 holograms were combined into a single, complex hologram. Moreover, each subhologram was individually tailored to correct for any optical aberrations [owing] to the colour difference, angular offset and so on”.

The next stage was to move out of the laboratory and demonstrate the technology in a real-world system.

“We are presently working with a commercial entity to test in just such an environment,” said Forbes. The approach of the team could be used in both free-space and optical fibre networks.