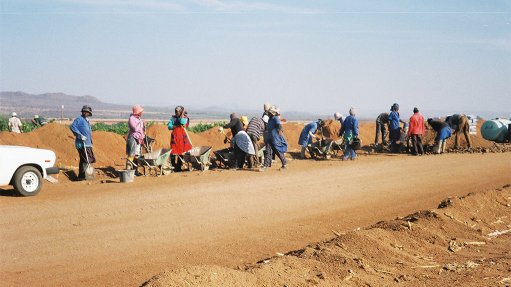 “The awarding of tenders for infrastructure projects to certain SMEs over others causes conflict in communities,” she adds, citing a road project in the Eastern Cape, which Hyson Cells inspected, as an example. The project passed through the domain of different communities, with community leaders demanding their financial share of the project.

These demands also include that employment for the project must be from the immediate area, and that “foreign” nationals will not be tolerated: “Not meeting these demands would result in demonstrations from community members preventing companies from entering construction and project sites,” she explains.

While large civil construction contractors would have the necessary funds to place a deposit as a guarantee, SMEs would not have the required capital for this, and also have difficulty in obtaining credit, Hall points out.

She states that many SMEs do not have the experience of handling multi-task projects on site, and normally receive payments daily, lessening the incentive to work faster. This results in SMEs operating at a loss, as they would not be able to compensate for time and wage bills in the way that large construction companies do.

Hall claims that the most successful projects in which the company has been involved are those in which local older women from surrounding communities become involved.

She says these women are willing to work hard, as many of them are mothers and need to provide for their families.

“The best we have had is where a local church supplied women to form a newly registered SME. They come from all the local areas, do not put up with interference and are not interested in SMEs being awarded tenders for political connections. They appreciate the square metre rate, as they get paid as a team for working fast and producing quality.”

A leader responsible for dispersing payments to team members would be chosen for the SME. This enables the client to measure the square metres completed biweekly, according to which the money for salaries, production bonus and supervision can be paid, which would then be distributed by the team leader. This makes managing payments for a project much simpler, says Hall.

3D Bubblelock consists of a mat comprising square hollow cells created from thin plastic film where every wall has a sealed 20 mm rounded protrusion to allow interlock. The cell mat is used as in situ formwork to cast a slab of connected, interlocking concrete block paving. The mat is equipped with integral laced rigging and has a range of applications, including roads, paving with specially designed pumpable grouts and the erosion protection of slopes with the cell mat filled with topsoil and vegetated.

It is also used in the double lining of dam walls, as the 3D Bubblelock can provide ten times the load transfer than that of straight-walled cells, which are generally used in road, dam and canal projects.

One of the main benefits of the 3D Bubblelock is the employment opportunities it provides, as it does not require highly skilled labour.

“We have done over 4 500 projects in which we have trained the locals to do the installation,” she says.

“We are used to big sites with up to 136 workers, with a large portion being women aged between 40 and 55. Middle-aged women have proven to be the most productive employees. We always send trainers to site to provide instruction and assistance for the duration of the job. The size of the team and the difficulty of the job determines the number of days to install and fit the 3D Bubblelock,” she states.

Applying the 3D Bubblelock involves the mixing of cement grouts to fill in as part of the formwork, such as that done by Hyson Cells on the Hereford Canal rehabilitation in Groblersdal, Mpumalanga, where the company completed 29 km of canal surface in 7 months. The project started in and was completed in 2014.

The project involved a team of up to ten people rigging the formwork mat, which provides the formwork of the concrete paving. Up to four teams, each team consisting of 25 workers employed from the local community, many of whom were women, were employed to mix and place the cement grout fill. This method is preferable to using a concrete mixer as it provides an opportunity for labour-based construction, which can be suitable for government projects in remote areas and is guaranteed quality as it is volume controlled.

“The work is not difficult, and we rotate the teams so that nobody has only one job every day. The members of every team also rotate every two hours to prevent tiredness. On the day of measuring, the teams work to get the most square metres done before they go home,” states Hall.

South Africa used to be a First World region for construction and engineering projects, she adds, lamenting the decline of activity in the construction sector. Changing to labour-based operations is difficult and expensive and will require a change in mindset for larger consultants and contractors to remain profitable.

“We have been specified for 32 projects and are waiting only for the SMEs to be established, which will take place after the elections and, in some cases, might be politically motivated,” concludes Hall.