Signs of life on Venus? 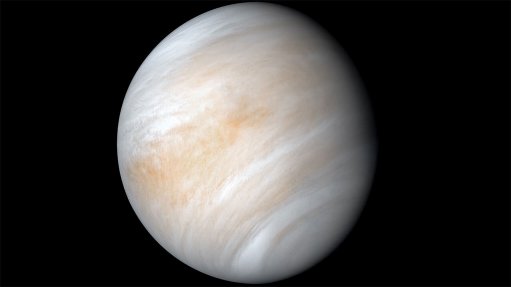 A 1974 visible wavelength image of Venus, taken by the Mariner 10 spacecraft and recently reprocessed with modern technology to make the structure of its clouds more visible.
Photo by: Nasa

An international (UK-US-Japan) team of astronomers has stunned the scientific world by announcing the discovery of a rare molecule in the atmosphere of Venus, the third planet from the Sun, and Earth’s nearest neighbour (often called Earth’s ‘non-identical twin’, because the two are so similar in size, mass and gravity). That molecule is phosphine, which is composed of hydrogen and phosphorous.

On Earth, there are only two sources of phosphine. One is industrial production, which is obviously not taking place on Venus. The other source is microbial life which thrives in oxygen-free environments. “When we got the first hints of phosphine in Venus’s spectrum, it was a shock!” affirmed University of Cardiff astronomer and research team leader Professor Jane Greaves.

On its surface, Venus is ferociously hot, with a mean temperature of 467 ˚C. But high in the planet’s cloud-filled atmosphere, the temperature is only 30 ˚C. On the other hand, that atmosphere is full of acid.

The phosphine in the Venusian atmosphere was found in a low concentration of some 20 molecules in every billion molecules. But this was still ten thousand times greater than any concentration of phosphine that could be created by any known natural non-biological means. On Earth, bacteria absorb phosphates from minerals or biological matter, absorb hydrogen, and finally release phosphine. To produce the levels of phosphine detected on Venus, Earth bacteria would need to work at only 10% of their maximum productivity.

“The discovery raises many questions, such as how any organisms could survive,” pointed out Massachusetts Institute of Technology molecular astrophysicist and research team member Dr Clara Sousa-Silva. “On Earth, some microbes can cope with up to 5% of acid in their environment – but the clouds of Venus are almost entirely made of acid.” Venus’s high clouds are about 90%-composed of sulphuric acid.

“The non-biological production of phosphine on Venus is excluded by our current understanding of phosphine chemistry in rocky planets’ atmospheres,” highlighted European Southern Observatory astronomer and ALMA European operations manager Leonardo Testi, who was not a member of the research team. “Confirming the existence of life on [sic] Venus’s atmosphere would be a major breakthrough for astrobiology; thus, it is essential to follow-up on this exciting result with theoretical and observational studies to exclude the possibility that phosphine on rocky planets may also have a chemical origin different than on Earth.”