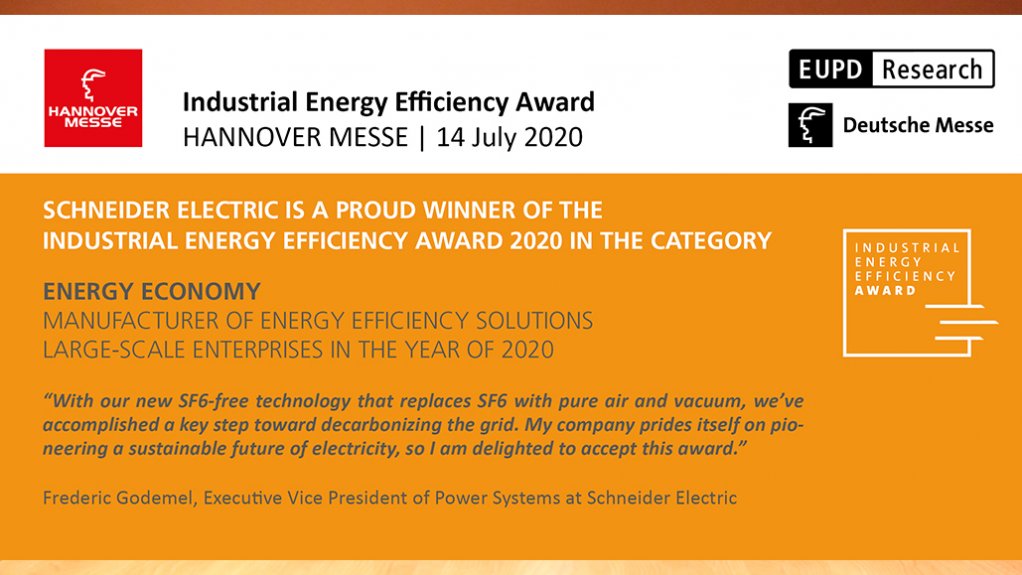 The Industrial Energy Efficiency Award showcases companies’ outstanding commitment to investing in and applying energy-efficient solutions. In cooperation with the independent market research and consulting company EUPD Research, the award was conferred by Deutsche Messe at the HANNOVER MESSE Digital Days. When choosing the recipient of the award, the jury considered its degree of innovation, contribution to efficiency, economic benefits, and social sustainability characteristics.

“As electrification increases around the world, and renewables continue to grow, more MV switchgear is needed. With our new SF6-free technology that replaces the greenhouse gas with pure air, we’ve accomplished a key step toward decarbonizing the grid and making power systems that are truly green,” said Frederic Godemel, Executive Vice President of Power Systems at Schneider Electric. “My company prides itself on pioneering a sustainable future of electricity, so I am delighted to accept this award.”

“The replacement of SF6 gas with normal air in switchgear contributes to making the energy industry more sustainable. Schneider Electric has developed an innovative plug-and-play solution and demonstrated its usage in various projects,” said Martin Ammon, Managing Partner and Head of Energy Industry at EuPD Research.

One exemplary project is with electric utility company EEC ENGIE in New Caledonia. In their pursuit of grid decarbonization, SM AirSeT is already proving its worth. “On behalf of EEC ENGIE, I am proud to have contributed to this unique technological advance that promotes the development of cleaner energy for our ecosystem and our customers. The absence of SF6 is a major asset in the operation of our networks for our island and distant territories faced with the problem of waste treatment. We would like to thank the Hannover Messe which, with this award, rewards manufacturers and their customers for their commitment to a low-carbon industry,” said Dominique Roecker, Energy Procurement Manager at EEC ENGIE New Caledonia.

Schneider Electric has reported successful pilot projects of its new SF6-free medium voltage SM AirSeT range at numerous other electric utilities, including E.ON in Sweden and GreenAlp in France, with more being energized on a regular basis, including in private power networks for commercial and industrial applications.

The Industrial Energy Efficiency Award comes on the heels of a previous recognition: In May, Schneider Electric’s SM AirSeT technology was recognized by IF, the celebrated design institution, with an IF Design Award. It was also nominated for another industrial prize awarded this year by Deutsche Messe, the HERMES Award, where it placed among the three finalists.