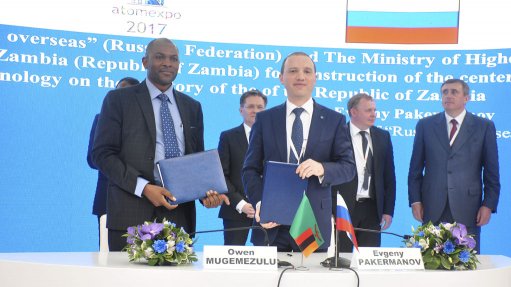 Rusatom Overseas, a division of Russian State-owned atomic corporation Rosatom, on Monday signed a project development agreement (PDA) with Zambia, paving the way for a preliminary feasibility study into the proposed construction of a nuclear power plant.

Rusatom Overseas and the Zambian Ministry of Higher Education signed a PDA for the construction of a Centre for Nuclear Science and Technology.

Russian nuclear power equipment and service exporter JSC Atomstroyexport and the Ministry also signed a contract for the preliminary engineering survey of the selected site for the centre.

Lastly, the Ministry signed an agreement with nuclear power plant service integrator JSC Rusatom Service for the assessment and development of nuclear infrastructure in Zambia.

This contract provides for the assessment of various elements of the country’s potential nuclear infrastructure and drawing up of a plan for their development in accordance with the recommendations set out by the International Atomic Energy Agency.

Rusatom Overseas president Evgeny Pakermanov said Rosatom was ready to render its full assistance to Zambia in the development of that country’s national nuclear science and technology sector.

“The agreements signed today represent a very important step in the implementation of the project,” he stated, adding that Rosatom expected the general contract for construction of the Centre for Nuclear Science and Technology to be agreed upon and signed before the end of the year.

The ninth edition of the Atomexpo is currently being held in Moscow, Russia.

*Dylan Slater is a guest of Rosatom at the Atomexpo in Moscow.