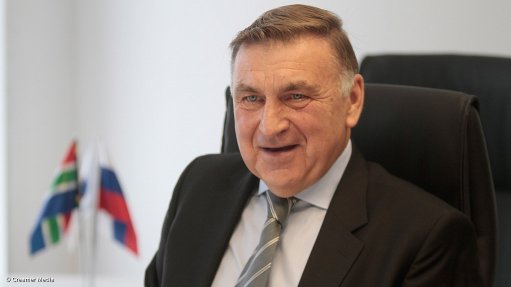 Russian nuclear vendor Rosatom has confirmed that it is considering various funding models, including the extension of a State loan, as part of its offer to South Africa for the building of new nuclear power plants (NPPs).

Speaking during an energy roundtable in Johannesburg, Rosatom regional VP: sub-Saharan Africa Viktor Polikarpov said he was unable to offer details on the preferred funding model, as this would be determined by the South African government, which intended running a competitive procurement process.

But Russia and South Africa were likely to conclude an intergovernmental agreement outlining how a State loan could be extended in the event that Rosatom was selected to build South Africa’s proposed NPP fleet.

The South African government recently concluded nuclear vendor parade workshops with delegations from Russia, China, France, South Korea and the US. At the meetings, the various vendors outlined their likely approach to meeting South Africa’s aspiration of building 9 600 MW of nuclear generation capacity as envisaged in the current version of the Integrated Resource Plan (IRP).

The IRP, which was published in 2011, was widely held to be out of date. Nevertheless, the Department of Energy indicated in a recent Parliamentary reply that it was implementing the nuclear new build programme in line with the Cabinet-approved IRP, as a draft IRP Update (which proposed that the NPP roll-out be delayed, curtailed or even abandoned unless specific cost thresholds were met) had not been officially approved.

The department continued to stress, however, that the nuclear procurement process had not yet started and that no decision had been taken on the procurement model to be pursued.

Polikarpov indicated that the Russian offer would seek to ensure that South Africa was able to pay off the NPPs in 15 to 20 years – thereafter they would become a “cash cow for future generations and not a burden, much like Koeberg”.

An intergovernmental agreement could be concluded outlining what work Russia and South Africa would perform respectively during the design and construction phases. A “fixed debt” and “grace period” for South Africa’s repayment would be determined through the procurement process. Foreign-exchange issues were also yet to be finalised, but it was possible that the loan could be rouble rather than dollar denominated.

Rosatom envisaged the money required to pay off the debt arising from the electricity tariff, which it expected would be marginally above the cost of NPP production.

“There is an impression that Russia will be pouring a lot of money into South Africa. This is not what will happen. Nobody is going to be giving out brown envelopes to officials – this is total nonsense,” he argued. “The money will not leave Russia. The money will stay in Russia, that is how all State loans work.”

But Polikarpov also stressed that a possible State loan was but one funding option available, noting that Rosatom had enter into a public-private partnership for an NPP in Finland and was pursuing a build, own and operate model in Turkey.

“So there are many financial options that we can consider, not merely a State loan. We are very flexible.”

But he also emphasised that the offer would be broadened well beyond the construction of NPPs. It would be designed to create a South African nuclear industry, able to supply into Rosatom’s global project portfolio.

“It is true that NPPs are expensive to build, but the process of generation of electrical power is far cheaper in comparison with that of gas or coal generation,” Polikarpov argued, noting that NPPs were far less exposed to primary-energy price fluctuations.

However, nuclear sceptics consistently cautioned that nuclear projects were prone to being delivered over budget and behind schedule and were, thus, urging the South African government to pursue alternatives.

Some argue that smaller-scale gas, hydropower and even coal solutions would provide a lower-risk alternative to mega-scale nuclear projects and note that much of this capacity could be built by independent power producers.