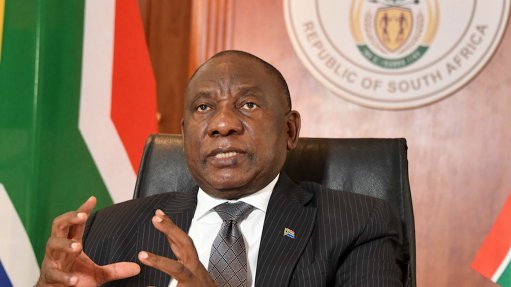 The creation of a separate State-owned transmission entity, as part of the restructuring of Eskom into three separate entities responsible for generation, transmission and distribution, has been held up by President Cyril Ramaphosa as key to promoting the purchase of the lowest-cost electricity for businesses and households.

In his weekly newsletter, which is dedicated to the reforms under way across State-owned enterprise (SOEs), the President said that the transmission company, which is schedule for establishment by year-end as the Independent System and Market Operator (ITSMO), would be able to purchase power from a broader range of providers, both private and public.

“This will improve transparency, increase competitiveness and promote the purchase of the lowest-cost electricity,” Ramaphosa wrote, adding that it should also facilitate more reliable supply.

The separation of the vertically integrated utility into three separate entities, under Eskom Holdings, is informed by the policy changes outlined in the ‘Roadmap for the Reform of Eskom in a Changing Energy Supply Industry’, published by the Department of Public Enterprises in 2019.

Under the current schedule, the ITSMO will be established by the end of December, with the legal separation of the generation and distribution entities to follow by December 2022.

Eskom CEO Andre de Ruyter has stressed, however, that the formation of the ITSMO by year-end is subject to it obtaining certain regulatory and legislative approvals that are outside Eskom’s direct control.

De Ruyter has also underlined the importance of the ITSMO to the sustainability of South Africa’s currently failing electricity supply industry, describing the catalyst for enabling significant additional private-sector investment in generation capacity.

Such capacity would help bridge the current shortfall of at least 5 000 MW and facilitate a “future that is cleaner and greener” by investing in low- or no-carbon generation plants to meet demand and replace Eskom’s aged and increasingly unstable and polluting coal fleet.

Ramaphosa highlighted that the country’s renewable energy independent power producers programme had already secured significant private investment in energy generation and that further private investment would be stimulated by the raising of the licensing exemption for embedded generation from 1 MW to 100 MW.

“This is vital at a time when the country is suffering from severe and sustained electricity shortages and where neither Eskom nor the State is able to invest in new generation capacity,” Ramaphosa wrote.

He added that the reforms would also give Eskom the space to address its financial and operational challenges.

“They provide a clear path towards a more efficient, financially sustainable state-owned utility that is able to provide cheaper, cleaner energy to all South Africans.”

Likewise, Ramaphosa argued that the long-delayed establishment of the National Ports Authority as an independent subsidiary of Transnet, in line with the National Ports Act of 2005, would support the upgrading of infrastructure and lower the cost of logistics.

Establishing the National Ports Authority as a subsidiary with its own board would mean that revenues generated by the ports could be used to replace old equipment and upgrade the ports,  and ensure the equal treatment of all terminal operators, whether public or private.

“This will make our ports more efficient and our exports more competitive, and benefit the entire economy. For the ordinary consumer, it will mean reduced prices in the long term for many of our goods. For our exporters, it will mean greater competitiveness in global markets.”

Ramaphosa stressed, too, that government did not need to continue to own SOEs, which have become known for corruption and mismanagement, “simply for the sake of it, or because this is what the democratic government inherited from the apartheid State.

Rather, continued State ownership should be informed by the need for the effective functioning of key network industries, such as energy and ports, and by the need to ensure that the basic needs of all South Africans were met, particularly the poor.

“We firmly believe that public ownership is necessary in critical sectors of the economy and that the country needs robust SOEs that are able to drive economic growth and transformation.”

He dismissed concerns that the reforms would diminish the importance or reduce the value of SOEs.

“In fact, the contrary is true.

“These reforms will ensure that while strategic infrastructure remains firmly in State hands, our SOEs will become more efficient and the industries they support will become more competitive.

“Equally, these reforms are important to ensure that SOEs implement their broader developmental mandates to support all citizens and the economy.”