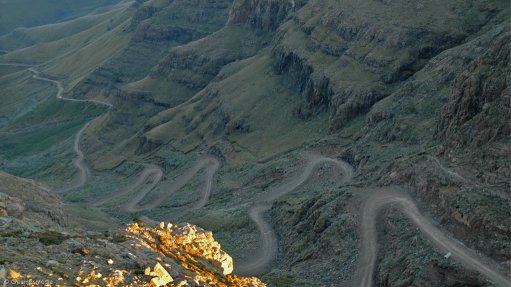 The first phase of this project had already been completed, with 14 km of the road now fully tarred.

Should there be no further appeals, construction of the remaining 5 km would begin within five months and would bring the total cost of the project to R887-million.

The upgrade of the gravel road to tar was halted when stakeholders, including local tour and lodge operators, opposed it, citing reasons to the effect that the upgrade would negatively impact on their business. The winding road up to the summit of Sani Pass attracts 4x4 enthusiasts from around the world.

Following the complaints, the Minister initially ruled in favour of the tour and lodge operators, a decision that the KwaZulu-Natal Department of Transport (KZN DoT) appealed in 2013.

The KZN DoT’s appeal was based on the importance of meeting the commitments of a memorandum of understanding (MoU) signed by the governments of Lesotho and South Africa in 2005 to improve commercial, social and economic opportunities between the two countries through increased accessibility.

Specifically, the MoU entailed a declaration of intent with regards to technical cooperation on roads, which related directly to the 19 km upgrade of Sani Pass road (P318), from the Old Good Hope Trading Post to the summit of the Sani Pass at the Lesotho border post.

The KZN DoT said in a statement on Wednesday that the primary objective of establishing the “critical” Sani Pass route between South Africa and Lesotho was to improve trade relations between the two countries.

“From an environmental perspective, it makes economic sense to upgrade the road from gravel to tar, as gravel roads require regular maintenance every two years.

“Further, retaining the road in its gravel state will actually negatively impact the surrounding environment. Seamless and legal movement of people between the two countries will also help to strengthen our economic ties, grow shared opportunities and ensure sustainable and mutually beneficial development for both countries,” Mchunu commented.