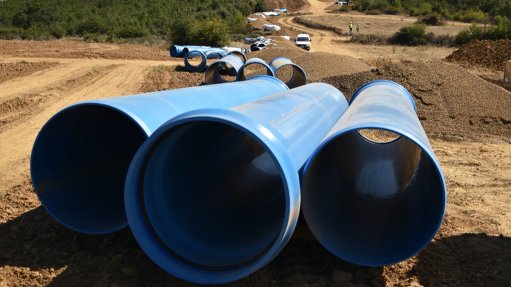 SPONSORED POST: Well-laid plastic pipe has a maintenance-free work life of more than 50 years, and in some cases 100 years. Built on years of innovation and experience, Sizabantu’s PVC-O pipes present the ultimate future for water and sewer infrastructure.

Research suggests that as much as 60% of potable water conveyed in aged and damaged infrastructure could be lost from the network and never reach the end-user.

“South Africa is a water-scare country, we need to protect our valuable water resources. If we can replace and upgrade existing networks, we will address a major part of the water availability to the citizens of South Africa,” says Sizabantu Piping Systems director Sean Harmse.

“Sizabantu has been in the water industry for more than 17 years and continues to grow. By bringing new technology and products to the market, we will form an integrated part of South Africa’s water security and supply. Our industry relies heavily on stable and reputable manufacturers to lead it into the next decades,” continues Harmse.

By establishing the first factory on the continent producing Molecor TOM 500 PVC-O pipes,  one of the most advanced pipes for the conveyance of high-pressure water currently available on the market, Sizabantu has firmly established itself as a market leader.

Sizabantu’s state-of-the-art factory in Richards Bay is the culmination of a partnership with Spanish company Molecor Canalizaciones, recognised as world leaders of bi-axle PVC-O pipe technology. Through this joint venture, Molecor and Sizabantu have introduced the latest thermoplastic technology to South Africa, creating new jobs and transferring world-leading skills.

The M-OR-P 5012 system introduces a new machine for high quality PVC-O pipe manufacture, with never-before-seen diameters. The first DN 1 000 pipes are now being manufactured in Madrid and the DN 1200 is expected to be available in the near future.

TOM 500 PVC-O pipes are less than half the weight of PVC and PE pipes, and between 6 and 12 times less per linear metre than cast iron pipes of an equivalent nominal outside diameter. This, together with their ease of connection and watertight joints, ensures the highest-speed installation performance in the market. The full range of PVC-O TOM pipes has become the best choice for the pressurised conveyance of water, due to their improved physical and mechanical properties.

TOM 500 pipes also have an extremely high resistance to impacts. Moreover, the material creep behaviour is very low, ensuring long-term durability of up to 100 years for a pipe working at nominal pressure.

The pipes offer lower celerity than other piping systems, which means less water hammer, caused by sudden variations in water volume and pressure. Thanks to molecular orientation, TOM 500 pipes have a higher internal diameter and greater flow section, contributing to their hydraulic capacity, which is about 15% to 40% more than pipes made from other materials. In addition, the TOM 500 pipes have a maximum ductility that allows the pipes to bear big deformations of their internal diameter. The products have also proved to be highly resistant to chemical and mechanical degradation and corrosion.

The full range of TOM 500 PVC-O pipes manufactured by Molecor run from DN 110 to DN 1200 and can reach pressures from PN 12.5 to PN 25, and include the ecoFITTOM PVC-O fittings, providing a full solution that covers all the medium- and high-pressure needs of the market.

The pipes and fittings can be used for numerous applications, including potable and non-potable water transport, irrigation, sewerage, fire protection and even industrial applications. TOM pipes and the ecoFITTOM fittings offer the best solution to pressurised water conveyance.

Sizabantu has since supplied pipes to numerous notable projects, including the City of Polokwane’s Sterkloop Wellfields Infrastructure project where 450 mm PN 25/20 was installed, as well as the Mutshedzi Bulk Water Network in Venda, which used 630 mm and 450 mm PN 20.

“This is a clear indication of the confidence that PVC-O has instilled through the hundreds of projects it has been supplied for. Our export into Africa has also seen massive growth and countries like Zambia, Botswana and Madagascar are now insisting on PVC-O,” he says.

TOM 500 PVC-O is environment-friendly and completely recyclable in terms of the SANS 16422 specification. TOM 500 PVC-O also uses less energy when manufactured and installed, compared to other pipe material.