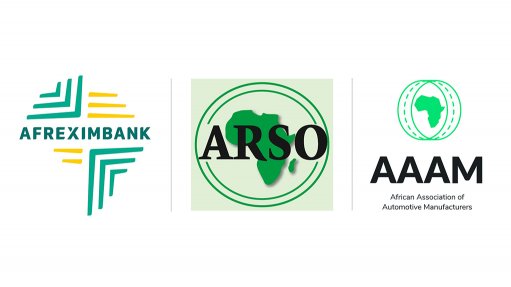 The project to harmonise standards across the automotive sector in Africa is progressing well, reports the African Association of Automotive Manufacturers (AAAM).

The AAAM says the African Export-Import Bank (Afreximbank) is continuing its support to the African Organisation for Standardisation (ARSO) as it works to harmonise standards in order to facilitate the accelerated development of the automotive industry across the continent.

The harmonised standards are to be adopted by individual African countries, facilitating cross-border trade, under the African Continental Free Trade Agreement (AfCFTA).

There are 1 432 international automotive standards worldwide, developed largely by the International Organisation for Standardisation and the American Society for Testing and Materials.

It is anticipated that some 250 standards will need to be harmonised based on the basic components, accessories and replacement parts that are necessary to keep a vehicle safe and operational.

ARSO had initially targeted 18 basic standards, based on the demands of the industry, to facilitate the development of the automotive sector on the continent.

Since inception of the project in 2019, ARSO has, with the support of Afreximbank, been successful in harmonising 42 international standards, well above the targeted 18.

An initial grant provided by Afreximbank was critical in highlighting the importance of harmonising standards in the automotive sector and opened the way to other partners to come on board.

The Physikalisch-Technische Bundesanstalt, in Germany, has now agreed to fund the second phase, targeting a further 100 standards, with the goal of reaching 250 standards by the end of 2022.

"In line with Afreximbank’s mandate to drive industrialisation and intra-African trade, we are delighted to be supporting the harmonisation of automotive standards on the continent as a crucial step towards the creation and development of a vibrant automotive industry in Africa,” says Afreximbank president Professor Benedict Oramah.

“Our support has enabled achievement of substantial progress within a short period of time.

“This is part of Afreximbank’s drive to establish and upgrade standards in various sectors, working with diverse partners, to support intra-African trade and the structural transformation of African economies under the AfCFTA.”

Afreximbank has adopted an automotive strategy under which the bank is supporting the development of automotive regional value chains, automotive financing, industrial policy and capacity building.

The bank will also organise an automotive show as part of the intra-African Trade Fair, which will give a platform to auto manufacturers, assemblers, original equipment manufacturers (OEMs, or vehicle manufacturers) and component suppliers to exhibit their products and interact with potential buyers and suppliers.

“The harmonised standards will pave the way for the elimination of tariff and non-tariff barriers to widen the markets for Africa’s automotive industry under AfCFTA.”

AAAM CEO David Coffey adds that ARSO has to be complimented for the work it has done in harmonising 42 automotive standards to date.

“These are critical in facilitating the development of the automotive industry on the continent.”

AAAM’s vision is to work with strategic partners, such as Afreximbank and ARSO, to develop a Pan-African Auto Pact, which envisages the establishment of an African Automotive Development Plan, built around a few assembly hubs in the central, south, east, west, and north of Africa.

“These hubs are then supported by a spread of value-adding activities in neighbouring economies,” explains Coffey.

“This will ensure that there is industrial development in all participating countries, and that associated economic benefits are distributed among these countries.

“Harmonised African automotive standards are essential for the long-term success of this Auto Pact.”