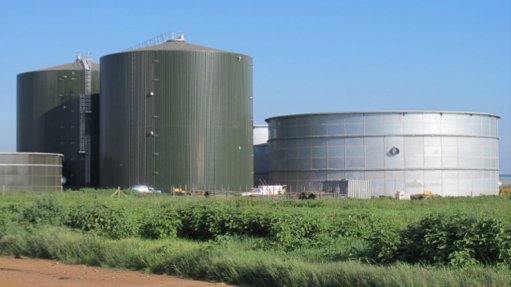 Legislation curtailing and, ultimately, banning the diversion of organic waste to municipal landfills is expected to support the development of South Africa’s biogas industry, which remains nascent with only 28 such projects having been built and commissioned to date.

South Africa’s National Waste Management Strategy of 2020 sets a long-term goal of ‘zero waste’ to landfills and includes targets of lowering waste diversions to landfills by 45% within five years, 55% in 10 years and 70% in 15 years.

GreenCape bioenergy analyst Yaseen Salie says landfill bans, along with rising disposal and electricity costs and effort to bolster electricity security and lower carbon emissions are likely to be important market drivers for biogas projects in the coming years.

In addition, biogas-generated electricity is more expensive than other renewable-energy solutions, such as wind and solar. “Biogas on its own competing in the energy market is quite difficult, but if you couple it with other factors, like waste, you could develop a viable model.”

He is optimistic, therefore, that a viable domestic biogas sector can still be developed, particular if a ‘circular economy’ model is adopted, whereby there is far greater cooperation between the agriculture, energy, water and waste sectors.

Southern African Biogas Industry Association secretary general Alberto Borello was even more upbeat, arguing that South Africa had the potential to develop 10 GW of electricity generation based on biogas, of which more that 1 GW could be developed within five years.

“In five years, more than 50 000 direct permanent jobs could be created and more than 140 000 in the development and construction of the projects,” Borello added, noting that biogas projects could, in time, attract up to R250-billion in direct local and foreign investment.

DiBiCoo project manager Ann-Kathrin van Laere reported that South Africa had been identified as one of five priority target markets for the EU, the others being Argentina, Ethiopia, Ghana and Indonesia.

The objective, through DiBiCoo, is to foster cooperation between biogas technology exporters in Europe and those developing and emerging countries where there is good potential to develop biogas or biomethane projects.

Demonstration projects had already been identified in all five countries, including the development of a biogas plant in South Africa that will utilise organic municipal waste and wastewater to produce biomethane for use in a micro gas grid.