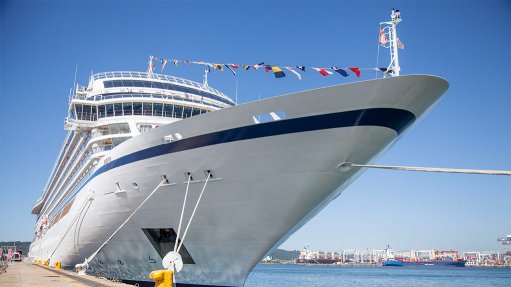 Viking Sun cruise liner at the Port of Durban

South Africa has attracted another new cruise line company to its ports, with the maiden voyage of the Viking Sun cruise liner, which sailed into the Port of Durban on April 12.

The ship is operated by Switzerland-based owner Viking Ocean Cruises.

It was welcomed by Port of Durban deputy harbour master for vessel traffic services Captain Justin Adams, who presented a plaque to the ship’s master, Captain Olav Soevdsnes.

“Receiving an award-winning cruise ship of Viking Sun’s stature at the Port of Durban is another feather in our cap,” commented acting Durban port manager Nokuzola Nkowane in a statement.

“This affirms the port and the City of Durban as a cruise destination of choice, as reflected in our nomination, once again, this year as a finalist in the World Travel Awards category of Africa’s Leading Cruise Port.”

Nkowane said the Transnet National Ports Authority and the Port of Durban expect to receive more world-class cruise ships at the new cruise terminal which is being developed by KwaZulu Cruise Terminal.

The company announced in September 2018 that it would be featuring South Africa heavily on its 128-day World Cruise from Miami to London, which includes 44 port calls in 21 countries on five continents.

As with all Viking itineraries, guests receive a complementary shore excursion in each of the ports and free unlimited WiFi.