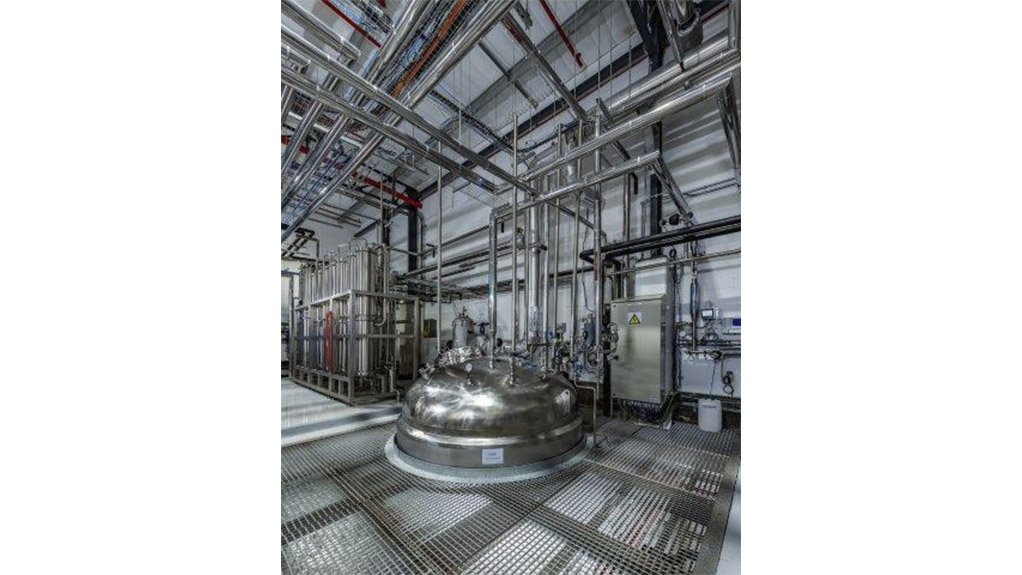 When German multinational B.Braun decided to establish a new integrated pharmaceutical plant in Longlake 20 Business Park in Johannesburg, property developer Zenprop turned to Paragon Architects South Africa (PASA), part of the Paragon Group. Representing one of the most significant industrial investments in South Africa in recent times, the project included office, laboratory, warehousing and production spaces, with a total gross area of 6 435 m2.

Situated on a highly-visible Greenfield site along the busy Longmeadow Boulevard, the facility also overlooks the picturesque Modderfontein reserve. PASA Architect Benjamin Chihota points out that industrial buildings tend to be large monolithic structures, and that the intention on this project was to humanise the scale of the facility while maintaining a simple and coherent architectural language.

The best means to achieve this was by using dynamic forms to reduce the overall scale. For example, breaking up large masses into smaller forms resulting in fragmented roof and façade forms and heights. This de-emphasises the scale of the facility within a largely under-developed landscape, while making use of high-quality and robust materials that are easy to maintain.

“The brief for an integrated pharmaceutical plant made for a complex typology because there are so many layers before you even get to the architectural design itself,” comments Chihota. Instead of a typical industrial facility, PASA was determined that the end result be a signature project that not only complements the surrounding business park aesthetic, but which also expresses the corporate identity of B.Braun itself.

“As a multinational, there is obviously an existing brand image that we needed to maintain. This meant developing a specific design language for the exterior, interior and the landscaping, but obviously still keeping within a South African context. Being one of the few new projects of this type and size built in South Africa to date, it really gave us an opportunity to showcase what we are capable of in the industrial sector,” elaborates Chihota.

The design process began in 2018, based on extensive consultation with the client and tenant. Construction commenced on-site in January 2019, with practical completion achieved in April and works completion in November 2020. Despite a delay due to the restrictions imposed by the Covid-19 pandemic, PASA saw the project through to its successful conclusion.

Planning and coordinating the functionality of the facility was perhaps the biggest challenge. Apart from the office and laboratory component, there is also warehousing space for incoming raw materials and outgoing products. Changerooms for workers to change in was also critical, in addition to the production component itself, which is the heart of the facility.

“In terms of the actual architecture, firstly we had to keep the client in mind and the highly specialised nature of this facility and its specific requirements. We also had to adhere to the development guidelines of the business park itself, while at the same time staying true to the design ethos of PASA and what makes us unique as a practice,” highlights Chihota.

The design process involved fragmenting the vertical and horizontal extents of the facility to reduce its scale. To give depth to the building mass, elements of the roof and façade were pulled out. To give the building envelope a rhythmic pattern, the roof sheeting and façade cladding’s contrasting colours stepped-in sections allowed for fluid connectivity that merged with the walls and wrapped around the windows. “That comes across in different ways in both the office and the warehouse. With most projects, you start out with an initial idea that invariably goes through different iterations, but ultimately it is a concept you stay true to right up to the final design,” stresses Chihota.

The major engineering challenge was coordinating the different services. Most projects require standard wet, electrical, fire and HVAC services. However, B.Braun had hi-tech pharmaceutical process equipment with very specific functional requirements thrown into the mix. “We really worked together well as a professional team in overcoming all of these different challenges,” notes Chihota. “The developer was very open to our ideas and willing to take them onboard. While we have a longstanding relationship with Zenprop that we are continually nurturing, it is equally important that we establish close ties with other consultants as well.”

The Paragon Group has a growing footprint in the industrial sector, which Chihota sees as a burgeoning market going forward. “The e-commerce sector is booming, as can be seen by the increasing demand for warehousing space, while the demand for commercial office space is stagnant. What gives us a leading edge in this sector is our reputation for delivering on time and within budget, being professional at all times, and being accessible to our clients,” he concludes.