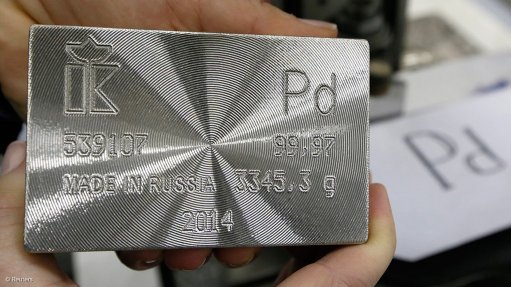 A bar of palladium.
Photo by: Reuters

JOHANNESBURG (miningweekly.com) – The palladium price is poised to exceed the platinum price for the first time since 2001, Thomson Reuters said on Tuesday with the publication of its GFMS Platinum Group Metals Survey 2017.

“In our view, it’s more a case of when, not if", Thomson Reuters precious metals demand manager Ross Strachan said of the prospect of palladium overtaking platinum.

Describing platinum as the worst performing precious metal in the year to date, Strachan said palladium’s persistent large deficit would see it above $850/oz well before year-end.

Last week saw platinum plunge precipitously to $893/oz, its lowest price ratio to gold since 1987, and at the time of going to press, its price was still in the doldrums at $910/oz.

However, platinum’s plunge is seen as being “too far and too fast” with GFMS expecting it to rally to above $1 000/oz this year on the back of weak mine output.

The closure of high-cost shafts and rand weakness pushed costs down 9% on a total production cost basis, while increasing earnings before interest and tax by 104% to $1 009-million, year-on-year.

Autocatalyst scrap rose by the same percentage in 2016, reversing half of the prior year’s losses to reach 1.04-million ounces (32.4 t). The increase was fuelled by higher returns from Europe, aided by a recovery in the total recyclable value of vehicles, and from emerging markets.

Platinum jewellery demand fell 12% to 2.18-million ounces (67.7 t), with China accounting for the bulk of this contraction, hindered by a softer economy and a market share loss to yellow 18 ct jewellery.

Elsewhere, fabrication demand in North America was also dragged lower by a lack of promotion and the high cost of jewellery, even though platinum was trading at a steep discount to gold.

The most pronounced of the 17%-higher other industrial gains were from the glass and petroleum sectors, as well as from a recovery in capacity expansions in paraxlyene, an aromatic hydrocarbon.

The only outlier last year was electronics demand which eased 2% on a drop in global demand for personal computers.

The production of palladium by mines fell 2% to 6.57-million ounces (204 t) on output reductions in South Africa, Russia and Canada, but this was offset by the ramping up of operations in Zimbabwe and the US. At the asset level, the largest decrease was registered at Norilsk’s Russian mine, while the largest increase was posted at Ngezi in Zimbabwe.

Almost exactly offsetting the decline in mine production was an increase in palladium scrap flows, from both autocatalysts and jewellery.

This was driven by tax breaks in China and increased market share for petrol vehicles in Europe.

The 18% increase in Chinese petrol-vehicle offtake lifted China above Europe into the top demand spot for the first time.