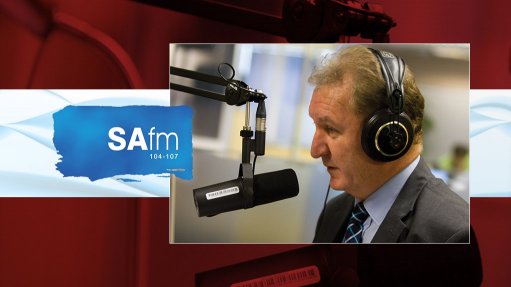 Kamwendo: Top gold miner Dr Mark Bristow, he apparently is ‘super excited’ about Africa as the ‘next China’.

Creamer: He spoke to journalists this week and he said that when it comes to Africa he is super excited and he believes that if correctly managed Africa could be the next China. He says that it is needing investment and aggressive growth and it has got the potential for both. If anyone is able to talk about Africa it is Dr Mark Bristow.

I remember in the mid 90s he was down in Selby here and I interviewed him and even then his geological knowledge of Africa was unbelievable. That is why they appointed him CEO of Randgold Resources. They have put it on the London Stock Exchange. He went in under very difficult circumstances in Africa.

He has built half a dozen mines. When I go into West Africa in the region where he is building the mines the people ululate. I ask them why do you ululate and they say that Mark Bristow has brought such good to the area. He continues to do that. His management in these areas are host-country management. A lot of people have come through with his bursary scheme and are managing these mines.

He also gets on his motorbike and has done four expeditions through Africa. He knows this continent very, very well. He says that if you draw a line from Dakar to Dar es Salam you will be amazed at the resources available there.

He says the human resources at the top; these people are young and unconstrained. They do banking on their cellphones, the most modern type of approach, and this is the way they want to be.

At the same time if you look at the metals and minerals under the ground along that stretch it is mind boggling. The forests and the water; this all means energy and agriculture. He has already built two hydro power schemes for his mines. He is building a third.

He is happy about DRC at the moment. He was one of the people that went in there late, because he always watches the political environment. He says a positive transition is rolling out there. He is very happy about the countries surrounding the DRC, they don't want war in their back yard. They are looking to a good transition there.From Zambia’s point of view that is also transitioning after having a lot of problems. You go into Congo Brazzaville: under new mandate. You go to the Central African Republic, it is starting to take steps in the positive direction.

He is saying if these big developed countries could put some of the money into Africa that is not earning them a return in their own countries because there is too much growth there, they will get such an exponential return - they will be surprised. He says it needs infrastructure and capacity. You have got to have the people capacity and know how to work this out. Then he believes that Africa could be the next China. He is talking 2025.

Kamwendo: London-listed Pan African Resources is planning to invest hundreds of millions of rands in a new gold project in Mpumalanga.

Creamer: That is Pan African Resources. They are a moderately sized miner, they are listed in London and also in Johannesburg. If you look at their results it is just record after record after record. They have just had record production, record profits - 160% up - and record dividends. They are giving their shareholders R300-million this time around.

They are looking at their Evander operation and they are saying we have also got an opportunity for what is the fourth phase of mining and the last phase. This is turning dumps into value. We see how they have done it at Barberton. Their Barberton tailings recycling project is mouthwatering. Not only is it producing about 18% more this year than last year, but it produces at such a low cost.

Gold is selling at $1 350 an ounce; this can work within $350 an ounce - that is its cost. It can take the $1 000 as profit, as it did. If we look at some of those mines there in Barberton, even the underground mines, if you look at sections of the Fairview mine, this is one of the richest mines in the world. It has got 35 grams per ton. That is the grade under there. There is only one mine in the world, in the United States, that is higher than that. Look at the life of this mine. This is going to go on for 22 years; already they have extended for 22 years, but they can do a lot more. Other rich mines like that in the world, like in America, have a very short life.

That is another point that was being made by the CEO of Pan African Resources Cobus Loots. He is saying that we should value some of the assets here. They have got some unique parts and so he is now wanting to invest R1.7-billion in a new tailings recycling plant at Evander. This is a big one - a million tons a month of material going through. We know that the biggest one is out in the East Rand with 2-million tons a month going through. He is hitting the big spots and another one is being planned in the West Rand with 1.5-million tons of product going through and good gold prospects. What happens with this recycling is that you get the gold quickly; it is not like sinking a shaft and waiting for ages. That is why he is wanting to go ahead with this and get gold out of that by November 2018.

Kamwendo: The first train powered by a platinum fuel cell locomotive has been unveiled in Germany.

We see unveiled in Berlin a hydrogen fuel-powered locomotive that is going to pull trains there. This is being done by the French company Alstom. Alstom have created the fuel cell and sold the idea to three states in Germany. Those states have signed letters of intent.

What surprised me about Germany is that they use a lot of diesel on their rail, they don't even have electrification in many places. The Germans aren’t happy with this diesel because it has got its emissions. If you come with a fuel cell the beauty is that it has no pollution, no emissions. This is what the Germans like.

Some of the mines have been looking at prototypes and have got fuel cell underground locomotives. So way to go people, go with the platinum fuel cell in transport and in electricity generation. And even try and persuade Elon Musk to come here and help us with this whole big project to make a huge demand for our platinum.