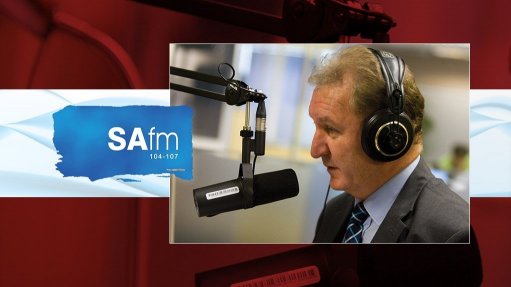 Kamwendo: Government is being called upon to concession some struggling railway routes to the private sector.

Creamer: This is being done by the mining industry. They want some concessions to come in on railway routes that are failing. With railway it is good and bad for the mining industry. When it comes to the iron-ore line it is good, but when it comes to the coal line, it is particularly good. The coal line is a mixture of public and private partnership.

The rail is provided by the government, the terminal is owned by the private sector and then the harbour is controlled by the government and the ship is private. So it’s public-private, public-private and it works brilliantly and is one of the best in the world. But, when you get to other metals and minerals like chrome in particular the industry will call for five rail wagons and the freight rail system will say we can only give you two. Then they have to jump into trucks and travel down to the port, which is just what we don’t want them to do. We don’t want these trucks on the roads, they are dangerous and damage the roads. We have had accidents and it is very costly.

So, if the State is going to be involved in these big network industries with big transportation, they need to do it well. I think they need to concede now that they are not doing it well in certain pockets. They could concessions sections of the rail to the private sector and not to one company, but to more than one company so that you can get competitive juices flowing. But the railway line is used and will still belong to the State, but whoever takes the product along there could be a private sector company.

Kamwendo: The Mandela Mining Precinct has come out of its starting blocks at promising speed.

Creamer: This is another public-private partnership. We know that in  1994 the mining research went into the hands of government and we just saw it shrink and almost get to nothing. Now they have resurrected it under public-private partnership at the Mandela Mining Precinct in Carlow Road, Johannesburg. This is showing vigorous signs and we saw this week how they came out and unveiled two new rock-drill prototypes.

There will be two more phases to this. This is a prototype at the moment and there will be another conclusion before the end of the year, as far as design is concerned. Then commercialisation will go into the third phase of next year. We can see how fast people can move if they focus and how much benefit this could be for the mining industry.

Kamwendo: Solar power is now so low-priced that farmers and off-grid miners are installing it.

Creamer: This whole idea of the State controlling the price of electricity has led to a monopolistic price structure. So, now that solar power has much cheaper inverters and much cheaper equipment, it is coming in at such a low price that people are flocking to it. In fact, this particular company is a tremendous success in agriculture and also with off-grid mines, particularly those who are not getting the grid power and are using diesel.

Diesel is so very expensive and climate negative, because it gives off fumes that are very bad, because often the quality of the diesel which leads to high maintenance. Now, with solar power coming in, it is just so much more efficient and so much more during the day that they can really get a good return on it.

The one farmer in the Northern Cape that has used it throughout the year, but really only needs it for three months. It does get credits then from Eskom for putting clean solar power into the system and then only draws it out for three months and uses up those credits. So, it is quite nice innovation coming in and solar power showing the way.