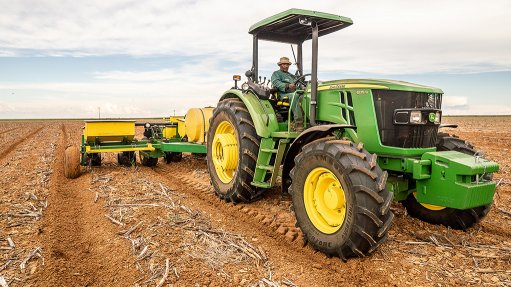 Original-equipment manufacturer John Deere received approval from the National Regulator for Compulsory Specifications to market and sell its new 6B series of tractors in South Africa, following several years of extensive testing throughout Africa.

“The 6B series was designed specifically with Africa in mind. We have noted our customers’ requests and have, therefore, designed the 6B to suit Africa’s harsh and remote conditions,” John Deere branch marketing manager Stephan Nel tells Engineering News.

Although the 6B series can be fitted with the entry-level precision agricultural hardware that offers basic features, such as location, fuel consumption, idle time monitoring, and remote diagnostics, Nel explains that the 6B is a more frugal option, particularly in terms of aftersales support.

This is owing to there being less electronics and fewer sensors than some other John Deere models. This makes it easier to maintain and repair in remote locations where service centres with specialised technical support might be quite a distance away.

However, John Deere branch sales director Jaco Beyers says the 6B series is designed to offer the customer the power of choice, as many advanced features can be added on request.

“The 6B series is ideal for new, smaller-scale commercial farmers. This new generation of farmers is seeking a scalable solution and the 6B is a product fit for that market,” he says.

Every model in the 6B series is available in cab and open operator station (OOS) configurations.

The deluxe package has 24 forward, 12 reverse wet-clutch high-low power reverser transmissions, which can operate at up to 30 km/h for the 6095B model and up to 40 km/h for the 6110B, 6120B and 6135B models. The mechanical front-wheel drive is mechanically engaged, while the power take-off system is controlled by a switch positioned on the right-hand-side control console.

The cab configurations are fitted standard with an air-conditioning and heating system, which is beneficial for operating in harsh African climates. This configuration is also available in the premium and deluxe configurations.

The premium cab configuration packages are driven by 24 forward, eight reverse wet-clutch top-shaft synchronised transmissions. The 6095B model can achieve a maximum speed of 30 km/h, while the 6110B, 6120B and 6135B models can achieve 40 km/h. All the models in this package are equipped with a mechanical front-wheel drive and electrohydraulic power take-off system. The premium cab operator stations also feature fixed steering columns and adjustable seats.

The 6095B premium model offers a hydraulic flow of 50 𝓵/min, delivered through two external mechanical rear selective hydraulic valves, while the 6110B, 6120B and 6135B models deliver 60 𝓵/min through three external selective control valves.

The three-point system is operated with control levers mounted on the rear right- hand-side fender.

The power take-off system in the deluxe cab is controlled by a switch positioned on the right-hand-side control console.

The deluxe cab configuration package has an adjustable steering column with a seat featuring arm rests to reduce driver fatigue. These tractors are also equipped with two front and two rear lights for working at night.

All the 6B models feature mechanical front-wheel drive, which Beyers says is critical for strenuous work in African applications.

The models can also handle a variety of implements, including tillage, haymaking, seeding and planting equipment. The three-point hitch has a lifting capacity of 2 500 kg for the 6095B model and 3 300 kg for the 6110B, 6120B and 6135B models.

“These tractors are also ideally suited to haulage applications such as grain carts and sugar cane transport. It is also well suited to beef and dairy applications,” Beyers concludes.