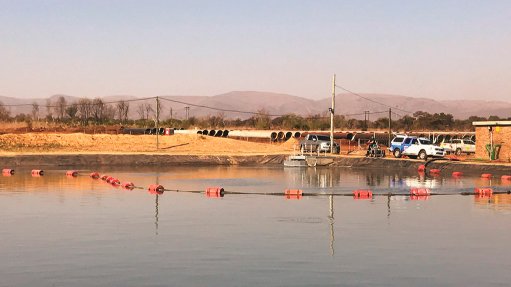 “We were requested to clean two wastewater settlement ponds which had silted up and were no longer performing their function of settling the sewage before it left the property,” says Lee Vine, managing director at Integrated Pump Rental. “Each dam measured about 100 metres by 100 metres and was about three metres deep; we estimated that they were about 70% filled with sediment.”

The company’s new SlurrySucker Mark II, with a vortex-type impeller in the slurry pump and a redesigned dredge head achieves up to about 50% solids concentration by volume. Vine says this significant especially when compared to the 30-40% concentration with the standard dredge head. The larger holes and the vortex-type impeller allow for larger solid objects like boots, gloves and hessian bags to pass through without blocking the system.

“After being awarded the contract, we quickly moved our equipment onto site; the total weight of the SlurrySucker is only about two tonnes – perhaps four tonnes with accessories – so it is relatively lightweight and easy to move around by road trailer,” says Vine. “We spent a day setting up the unit, then spent 25 days cleaning each dam, working an eight hour shift each day.”

Operated by just one person, the six metre long and three metre high unit agitates the sediment in single metre wide paths as it moves up and down the pond.

“After about two months on the job, we were pleased to have completed our mandate successfully without a single blockage,” he adds. “It took just one day at the end of the process to decommission the equipment and move off site.”

Vine emphasises that the design of the SlurrySucker allows it to be used on plastic-lined dams without risking any damage to liners, as it uses water to agitate the solids, and does not have cutters that could damage the pond liner.

“This is particularly important from an environmental perspective, as wastewater could leak out if the liner was cut or damaged, and could contaminate groundwater,” Vine says.

In addition to the turnkey service provided here, Integrated Pump Rental also offers contracts where the team will come to site every year to inspect and dredge the dams to ensure they are kept operational and efficient.

Also, if the end-user has a more regular and ongoing need, the company can also sell the equipment to the customer and provide training so that the application of the equipment can be effective.

Service levels are high on the SlurrySucker dredge units, as they are manufactured using locally produced components, and incorporate quality Grindex slurry and dewatering pumps. This means that spare parts are readily available and the expertise is on hand to maintain the equipment.