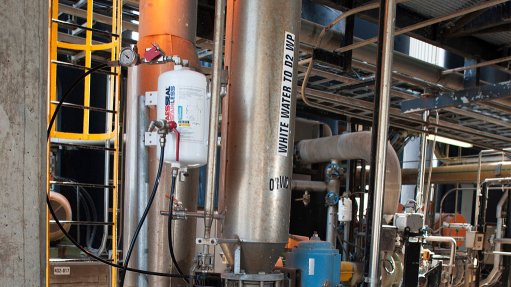 International packaging and paper group Mondi is replacing the quench-to-drain flushing and lubricating systems of the mechanical seals at its Richards Bay mill with a continuous loop water management design supplied by mechanical seals and support system company Aesseal.

The Aesseal systems will cut water use at the plant by more than 60 000 kℓ/m, helping to conserve scarce water resources in northern KwaZulu-Natal.

Mondi placed its order for the replacement systems in February with fluid sealing and wear resistance company Easy Coat, the Aesseal agent for Richards Bay.

The order comprises 167 Aesseal type-SWO2 and type-SWO3 water management systems that will use recycled water to cool, lubricate and flush mechanical seals in the Richards Bay plant. They will replace a competitor’s once-through flushing designs that need a constant supply of fresh water.

The order follows successful trials of 152 such systems installed by Easy Coat over the past 12 years.

Aesseal’s SWO2 system uses an integral vessel to store flushing water for continuous recycling. The system is connected directly to the plant water line, which becomes the system’s fluid and pressure source: the pressure is adjusted so that the barrier fluid pressure within the system is maintained at 1 bar above stuffing box pressure, resulting in a pressure differential that keeps harmful products away from mechanical seal faces and increases seal and pump reliability. The barrier fluid is circulated to and from the mechanical seal by the thermosyphon effect, thereby reducing water waste and providing more efficient cooling than the once-through quench-to-drain design.

Aesseal’s SWO3 system is supplied with finned tubing as standard so that it can be used on high-heat applications. Mondi will use a mix of SWO2 and SWO3 systems in accordance with process product temperature.

Besides lowering costs by conserving water, the SWO2/SWO3 system is superior to the once-through format in three ways: first, there is an indicator that shows when any inboard seal failure occurs; second, the system is kept pressurised by a nonreturn valve which helps to prevent cross contamination of sealing water in the event of a failure; third, the system is fitted with a regulating valve which maintains water pressure and flow rate without further settings or adjustments after installation.

“The 167 new systems are being fitted to non-Aesseal mechanical seals, where we are replacing the quench-to-drain, double flow meter systems,” says De Villiers, adding that the competitor’s product is unable to offer a water management system that can meet Mondi’s water saving target.

It was water scarcity in the Richards Bay region that gave Easy Coat the opportunity to present Mondi with a water saving strategy. Mondi’s own environmental department at the Richards Bay mill provided support for this proposal because of a proven mechanical seal, a mean-time- between-failure (MTBF) of over six years, and potential water savings of just under four-million kilolitres.

The installation some ten years ago of mechanical seals and water management systems at Mondi’s Merebank mill, just outside Durban, had resulted in multi- million-rand water savings and reduced downtime .