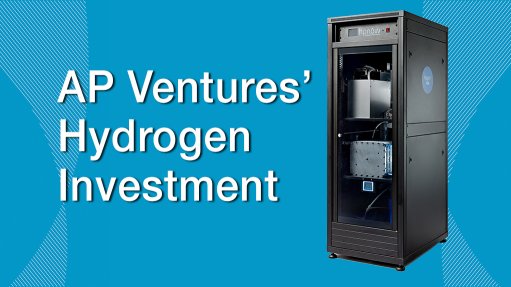 JOHANNESBURG (miningweekly.com) – A new investment in hydrogen, made by the sustainability-focused AP Ventures, bodes well for South Africa.

A big part of AP Ventures’ investing focus had been around hydrogen, which is being considered by more than 70 countries as a future universal energy carrier and which is also a significant user of PGMs in many applications.

Of the six backers of the London-headquartered AP Ventures, Anglo American Platinum and the Public Investment Corporation of South Africa are the two founding investors, with Mitsubishi Corporation, the Toyota-linked Mirai Creation Fund, Plastic Omnium and Sumitomo Corporation being the other four.

Mining Weekly can report that HPNow will use the latest equity funding to scale up and expand the market for its sought-after autonomous on-site hydrogen-peroxide generation technology solutions.

“We are also looking to support the deployment of these systems domestically in South Africa, through a licence agreement we concluded with the company,” AP Ventures founding partner Kevin Eggers stated in an emailed response to Mining Weekly, and added that a number of interesting leads were being followed up.

“We look across all technologies that use and enable the use of PGMs,” Eggers told the 2020 PGMs Industry Day, hosted by resources4africa and chaired by mining stalwart Bernard Swanepoel.

AP Ventures associate Michelle Robson, who led the investment into HPNow on behalf of AP Ventures, responded in writing to these questions:

Hydrogen peroxide is a common chemical used as wastewater treatment, bleaching agent, and biocide. Upon use, it breaks down into pure water and hydrogen. However, it is traditionally produced from fossil-based fuel in large-scale plants and at high concentrations, which makes logistics and storage costly, and because of associated safety concerns, highly challenging. HPNow solves this industry constraint by enabling consumers to generate hydrogen peroxide on demand from on-site, small-volume, scalable systems, using a benign and abundant feedstock. The company’s autonomous, safe, low-impact hydrogen peroxide production technology is an exciting example of the emerging ‘Power-to-X’ economy, which will be a critical lever in the global efforts towards decarbonisation. As a fund, AP Ventures invests in innovative technologies that address today’s big global challenges. HPNow’s technology offers an exciting ‘Power-to-X’ alternative for hydrogen peroxide generation, a tangible example of how electricity, as a feedstock, can decarbonise society’s current and future inputs and industries. In addition, HPNow’s core technology shares many similarities with the technology underpinning hydrogen fuel cells and electrolysers, and the fund is confident it can provide further insight and support to HPNow as they develop and scale their system, and manage their supply chain. (Editor’s note: The ‘Power-to-X’ concept covers the activities of taking surplus renewable electricity from wind, solar or water and converting it into other energy carriers – the ‘X’ – to be able to store the energy for later use and absorb energy fluctuations.)

Mining Weekly: To what extent are PGMs used in green hydrogen peroxide generation?

Mining Weekly: Why is it an advantage to produce hydrogen peroxide on site, autonomously and using wind, sun and water energy?

HPNow solves these constraints by enabling end users to generate hydrogen peroxide on demand using only electricity, air and water as inputs. HPNow totally bypasses the present-day supply chain through the offer of small scale, scalable systems which produce a steady stream of high purity hydrogen peroxide, directly at the point of use, at concentrations suited for end users. The company’s technology offers an autonomous, safe, low impact method of producing and using hydrogen peroxide.

Mining Weekly: To what extent is clean hydrogen peroxide generation reducing carbon footprints and what is its full potential to do so?

Hydrogen peroxide is a common chemical used in paper bleaching, chemical production, electronics, detergents, and cosmetics. A strong growth engine in recent years is environmental applications, including water and wastewater treatment and purification, and use as a biocide, where it is a proven and effective alternative to toxic biocides and water treatment agents. HPNow’s process emits no greenhouse gasses or other waste, and upon use, hydrogen peroxide breaks down into pure water and hydrogen leaving no unwanted traces or by-products. Therefore, the entire product offering provides an environmentally benign solution for these applications, dramatically reducing related environmental footprint. HPNow’s fully circulation solution results in the reduction of up to 3.7 t of greenhouse gases and 10 t of hazardous waste per tonne of hydrogen peroxide produced, as compared to bulk alternatives.

Mining Weekly: How does all this fit into the ‘Power-to-X’ economy?

HPNow’s technology, that is, the production of hydrogen peroxide via electrochemical synthesis, is another example of how electricity can be used as a feedstock for a wide range of applications, decarbonising society’s current and future inputs and industries.

Mining Weekly: Why is it already commercially proven in agriculture but not yet in industry and local government etc?

HPHow’s first commercial offering is targeted at the irrigation and livestock markets. The fresh funding and ongoing support from AP Ventures and Evonik will enable HPNow to scale-up and expand the product offerings to new market segments, with industrial and municipal water treatment next in line. Future potential applications also include solutions for healthcare, food and beverage and household appliances.

All these companies either utilise or enable the use of PGMs.

BUILDING BACK BETTER WITH GREEN HYDROGEN

Fuel Cells Hydrogen & Joint Venture Undertakings reports that hydrogen is set to play a major role going forward and that the world should focus on clean, green hydrogen, which is generated with the help of renewable energy.

“We now have a unique opportunity to build back better, create an economy that is fit for future challenges, is more competitive, inclusive, smarter and sustainable and hydrogen is a key part of this journey,” European Commission mobility DG Henrik Hololei told Hydrogen Week on November 25.

The event, organised with support from the European Commission and in cooperation with the German Federal Ministry of Transport and Digital Infrastructure, heard that green hydrogen and fuel-cell technology – both of which are PGM-catalysed – have the potential to address the worldwide twin needs around decarbonisation and recovery from the financial impact of the coronavirus pandemic.

Political, research and industry leaders shared best practices for building a clean hydrogen economy in regions and exchanged views on how European and international cooperation can accelerate the transition to a climate-neutral European economy that supports growth and jobs.

South Africa’s hot Northern Cape sun, prime wind, abundant land and ready Coega port make this country a candidate for the export of green hydrogen into what is expected to be a multitrillion-dollar market.