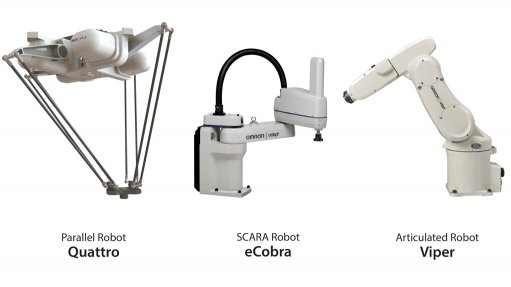 Industrial automation solutions supplier Omron launched 49 new best-in-class Adept Robots in April. The robots – now available in 39 countries, including South Africa – are integrated with Omron sensors, safety components and machine automation controllers that were all designed to simplify the use of robots in a production environment.

He states that the applications, such as transferring or picking up an object from one moving conveyor and placing it onto another, are relevant to most packaging lines in many factories. “For example, companies could replace some of the manual labour used in the packaging of fruit, with the robots . . . capable of performing the same job.”

He adds that Omron has incorporated several similar scenarios into the Adept Ace setup wizard. The Adept Ace refers to the programming software used for robots, with the integrated setup wizard included as a programme designed to guide the user through the robots’ configuration and operation.

This prompt-based, user-friendly programme enables the user to arrange the pick and place sequences for many of the application scenarios in the South African market. These include applications for stationary platforms, belt camera and fixed camera part picking, as well as static pick-and-place applications.

Janse van Vuuren notes that many applications relating to pick and place – with or without camera or belt tracking – do not require any complex coding, owing to the setup wizard’s automatic code generator.

He notes that a major benefit of the introduction of these robots is that it provides indus- trial robot models that achieve high-speed performance and reliability. The robots form part of the Scara, Delta and Viper Articulated robot families. Janse van Vuuren says the families “differ in terms of speed, precision repeat- ability, working range and pay loads”.

He notes that the Delta family has a pay load of 15 kg, while the Scara and Viper Articulated have a maximum payload of 5.5 kg and 5 kg respectively.

All the robots can be controlled by a common integrated development environment (IDE) – an all-encompassing programming application that allows for the flexible use of robot types based on specific applications.

The IDE also allows for comprehensive linkage with control products, such as programmable logic controllers (PLCs). This IDE is managed by the Sysmac automation platform. Janse van Vuuren explains that “the robots are controlled by a PLC. The Sysmac platform creates a communication interface using the Omron-designed function blocks that specifically command the PLCs. This is said to improve the total throughput of the most demanding production lines, overcoming the limitations of the traditional framework that uses conventional robots.”

Moreover, the integrated software environment facilitates design and development. The Automation Control Environment (ACE), or in this instance the Adept Ace, enables users to access a powerful three-dimensional emulation tool that significantly reduces the time to validate new automated processes. Vision-guided robotics applications are completely supported by the ACE PackXpert for packaging lines.

“The common controls, integrated software architecture and development environment meet current and future needs for ease of process design, flexible operation and predictable maintenance,” he says, concluding that the global launch of the industrial robots in April demonstrates Omron’s ongoing focus on innovative solutions that advance manufacturing and productivity through innovative technology.