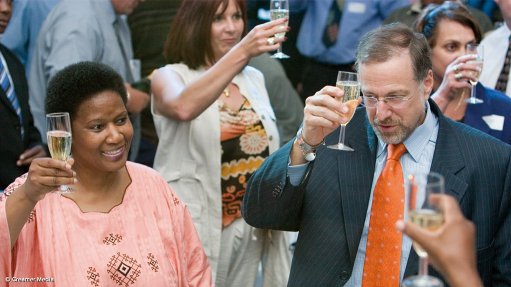 JOHANNESBURG (miningweekly.com) – Mining luminary Mick Davis’s new company Niron Metals on Monday expressed the belief that the development of the Zogota iron-ore endowment in Guinea had the potential to unlock the country’s rich resources for the benefit of all stakeholders.

Davis, who is well known for his impressive record in the South African energy and mining environments, now seems in pole position to lead the development of Guinea’s massive iron-ore resources.

Following a settlement between the Guinea and Beny Steinmetz Group Resources (BSGR) on mining concession and licence disputes, Niron said in a statement to Creamer Media’s Mining Weekly Online that the way had been paved for the creation of an effective mining partnership between Niron and the government of Guinea to mine Zogota, which the company looked forward to doing, subject the satisfactory settlement of all disputes between the parties.

“A further announcement will be made in due course, if appropriate,” said Niron.

Reuters quoted BSGR spokesman Bobby Morse as saying that output from Zogota would be railed to a port in neighbouring Liberia for export, while noting that the government of Guinea had previously wanted ore to be exported through the West African country’s own ports.

In 2012, Guinea stripped BSGR of its rights to Zogota and half of Simandou, which is regarded as one of the world’s biggest undeveloped iron-ore deposits.

The size of the shareholding BSGR may retain in these iron-ore assets is not yet known, nor whether Niron is interested in also developing Simandou, half of which is owned by iron-ore major Vale of Brazil, a company currently under the whip for the tailings dam collapse at Córrego do Feijão that caused the death of more than 170 people.

Mining major Rio Tinto was once keen on turning Simandou to positive account, with Tom Albanese, then Rio’s CEO, in 2010 telling Mining Weekly Online of his company’s intentions to start production in the 70-million tons a year range.

At that stage, Rio had more than 1 000 personnel in Guinea for the proposed high-grade Simandou iron-ore project, which the company said would require one of the largest civil transport developments in Africa.

Simandou was expected, from the outset, to have close to a third of the iron-ore capacity of Rio’s Pilbara operations in Australia, which at the time was yielding 220-million tons of product a year.

Albanese told Mining Weekly Online during a whistle-stop video interview at Johannesburg airport: "Simandou’s iron-ore quality is exceptionally good. We’re looking at material with a 65%-plus iron content with a very low level of impurity. It's very similar to some of the highest-grade material that has been mined historically in Brazil. If you put the maps of Africa and South America together, like the tectonic jigsaw puzzle, you'll see that a lot of the iron-ore fields in Brazil match up with the potential iron-ore fields of West Africa," he enthused.

Rio Tinto had, at that stage, already secured the International Finance Corporation as a partner and signed a Simandou project memorandum of understanding with Chinalco of China

Besides its contribution to capital, Chinalco, potentially with other Chinese State-owned enterprises, had strong infrastructure development capability to offer, which was required for the building of more than 700 km of rail, plus 20 km of tunnelling through mountain ranges, to a shallow Guinea port that required many kilometres of causeway and considerable dredging. The scope of the arrangements at the time covered rail and port infrastructure as well as the mine itself.

But nothing came of it, except, as Bloomberg reported on Monday, that Rio remains under investigation in the UK and Australia for payments allegedly made to a consultant to try to restore its rights to Simandou.

Media speculated on Monday that Zogota was unlikely to be the only target of Niron, which also has former De Beers executive Varda Shine and Switzerland-based Fos Asset Management founder Marcos Camhis on board.

Bloomberg reported on Monday that BSGR had agreed with Guinean President Alpha Conde to withdraw allegations of corruption levelled against each other over years and to drop a two-year-old arbitration case over Simandou. The news agency added that Guinea had also agreed to partner Davis in the accelerated development of Zogota, once disputes had been fully settled.

South African-born Davis, 61, a former finance director of the South Africa’s state-owned power utility Eskom, played a major role in the advance of South African mining major Gencor into in Billiton, which became the biggest mining company in the world as BHP Billiton.

In heading Xstrata, he was a veritable acquisition machine that grew the company at lightning speed before being taken over by Glencore, the major mining and marketing company that is active in 50-plus countries.

Davis normally builds a business case on projected supply constraints and then finds himself benefiting hugely from growing demand as well. Perhaps his timing will again prove spot on.