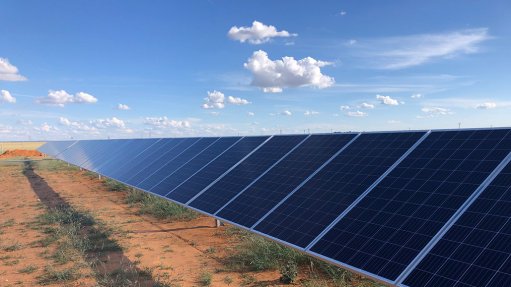 Over its 20-year operations period, the project will ensure participatory inclusion of local communities in the design and implementation of socioeconomic and enterprise development initiatives.

Matla A Bokone Solar chief community operations officer Nomzamo Landingwe says the project was originally known as Droogfontein 2 Solar, but renamed to Matla A Bokone Solar, “a unique Setswana name, referring to the ‘power of the Northern Region’”.

In addition to the employment created through the contracting out of various services, over 450 people from the local beneficiary communities were directly employed on the project during construction of the plant.

During its 20-year operation, the solar plant will benefit a number of communities, spread throughout the Sol Plaatje area, through various economic development programmes which are aimed at building economic and social resilience, as well as increasing access to the local economy.

juwi Renewable Energies was the engineering, procurement and construction contractor, and handed the completed site over to the juwi operations and maintenance team in March.