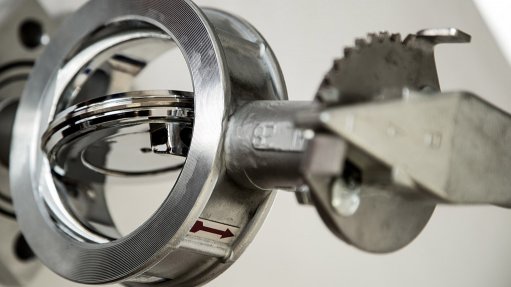 Paltech was one of the companies to benefit from the Marine Manufacturing, Associated Services and Other Manufacturing Industries Supplier Development Programme, which is managed by the Aerospace Industry Support Initiative (AISI) – an initiative of the Department of Trade, Industry and Competition (DTIC), hosted and managed by the Council for Scientific and Industrial Research.

With assistance from the DTIC programme, Paltech went through the complex process of obtaining marine certification from certification companies Bureau Veritas and Lloyd’s Register for its 80 mm, 100 mm, 150 mm, 200 mm and 250 mm single eccentric butterfly valves.

“Marine certification has really stringent requirements regarding design, materials and validation. Each step in the production process of the valves must be proven in terms of process and quality against rules as stated by Bureau Veritas and Lloyd’s Register,” Godwin explains.

The auditors check the process as it unfolds. Non-compliance to any aspect of the process requires that the process be repeated from the start, which implies a costly reinspection.

“This route, once complete, ensures that we follow a process that is in line with international standards,” she says.

The marine-certified Paltech valves are now eligible for use by local and international clients, as well as on merchant ships, naval vessels, oilrigs and other offshore installations.

The valves can be used for a number of applications, such as shipside, bilge and ballast valves, as well as for seawater and freshwater cooling.

“We’ve finalised the required in-house training, as our process has been redefined in line with certification requirements,” Godwin says, adding that the company will continue to conduct continuous retraining because its staff complement is increasing through the appointment of mechanical inspectors and artisans to meet expected demand.

“The marine certification, with the assistance from the DTIC, gives us an opportunity to reinforce the notion that we should not be importing anything that we can make and have certified locally. Imported products are our greatest competition,” says Mokoena Holdings CEO Kagisho Bapela, noting that local valve production accounts for less than 10% of local valve consumption.

The AISI-managed marine programme was initiated as part of a drive to take advantage of an identified gap in the local manufacturing market.

DTIC marine manufacturing deputy director Bianca Mokuena explains that the then Department of Trade and Industry (DTI) identified boat and ship building as a priority sector in 2011/12, as it emerged that the sector is a significant contributor to the South African economy.

“The manufacture and repair of ships and vessels in South Africa was viewed as a highly strategic industry, with strong and extended linkages to economic growth and employment multipliers,” she says.

DTIC marine manufacturing deputy director Andrew Mukandila adds that the programme is still very young, and that its full impact will be known only at a later stage.

“This programme is one of many steps being taken towards the reindustrialisation of South Africa and the revitalisation of the South African manufacturing sector, which is facing a negative trend,” he explains.

The success of this programme might inspire other sectors to bolster certifications and access to certifications to enable competitive local manufacturers to better exploit international markets, adds Mukandila.

Meanwhile, the DTIC is one of the strategic partners of the Manufacturing Indaba, which will be hosted virtually on December 9 and 10. The DTIC will have a strong presence at the event.

Paltech will also feature strongly, marketing its status as a marine-certified valves manufacturer.

“We want to ensure that the industry is aware that we are now marine-certified, and the Manufacturing Indaba will give us a platform to do that,” concludes Bapela.