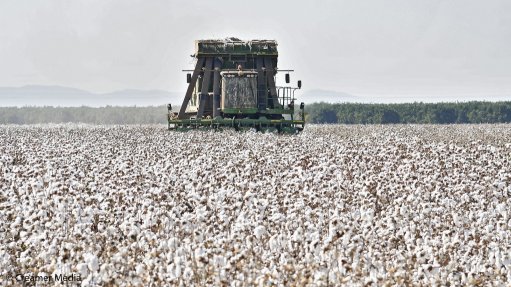 Clothing retailer Edcon has increased its order for cotton lint to 2 200 t for the next year as part of its commitment to the clothing and textile industry through the Sustainable Cotton Cluster (SCC).

Edcon’s Jet and Edgars subsidiaries use cotton lint to manufacture men’s chinos and t-shirts, as well as towels.

Edcon has since become one of three retailers, including Woolworths and Mr Price, to form part of SCC.

SCC ensures the entire cotton value chain is kept in South Africa, from the farmer to the retailer.

SCC functions as a programme of industry association Cotton South Africa (Cotton SA) and was established alongside Sastac in 2014 to serve cotton-specific interventions.

Sastac was established with R200-million funding support from the Department of Trade and Industry to revive South Africa’s clothing and textile industry.

The funding supported a five-year plan from 2015 to 2019 to accelerate growth and development of the cotton industry. The plan helped the industry to create between 7 000 and 8 000 jobs so far, and has assisted in forming 600 new small, medium-sized and microenterprises.

Cotton SA CEO Hennie Bruwer explained during a cotton farm visit in Limpopo, attended by Engineering News Online, that the clothing and textile industry in 2013 produced a record low 5 000 t of cotton lint, leading to South Africa importing 95% of its cotton.

He noted that that was sad considering that the country’s clothing and textile industry had been the second-largest employer in the country during the 1980s – second only to the gold mining industry.

The clothing industry had, since 2013, increased output to producing around 50 000 t/y of cotton lint, with the help of about 1 600 black emerging farmers growing cotton on 6 000 ha of clothing- and textile-focused farms.

Ginnery Loskop Cotton CEO Joseph Kemp said that there was more than 65 000 ha of land around the Marble Hall area in Limpopo that was ideal for cotton farming.

However, emerging farmers struggle to secure financing. He noted that if more private sector companies such as Edcon were to sign orders for cotton lint, then that could serve as security for financing.

Meanwhile, Edcon committed to continuously increasing its use of local materials to manufacture clothing and further support the SCC.

Edcon CEO Mike Elliot pointed out that Edcon had increased its use of local materials to 53% over the last few years.

If South Africa increased its local beneficiation of cotton to a level where it can do import substitution of 50% on four basic retail items – t-shirts, towels, chinos and underwear – it could create more than 75 000 jobs in the industry, and inject nearly R10-billion into the economy.