‘Little Foot’ hominid is much younger than originally thought 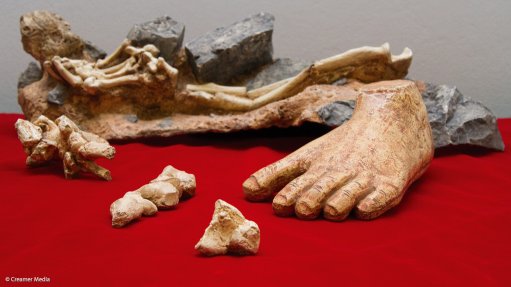 New research by the University of Johannesburg (UJ) and James Cook University (JCU) in Australia has found that the “Little Foot” hominid is much younger than originally thought.

“A human ancestor thought to be 3.7-million years old, should be younger than 2.8-million years, says the newest research from South Africa and Australia, published on 29 March 2017,” said UJ in a statement issued on Thursday morning.

The age of “Little Foot”, an extremely rare, almost complete skeleton of the human ancestor referred to as Australopithecus prometheus, has been hotly debated ever since its discovery at the Sterkfontein Caves, in the Cradle of Humankind world heritage area, South Africa.

Estimates have ranged from two to 4.2-million years, and the fossil is often touted as the oldest Hominid in southern Africa.

Little Foot was named for the four ankle bones which were found in 1980. The remainder of the skeleton was uncovered from 1997 onwards.

In the years since, researchers from many countries have tried to determine Little Foot’s age and its place in the species classification of hominids, the early ancestors of humans who lived-millions of years ago.

The new research by Professor Jan Kramers from UJ and Professor Paul Dirks from JCU adds the latest chapter in this debate.

In 2015, Professor D Granger of Purdue University, in the US and co-authors published an age of 3.7-million years for Little Foot in the authoritative science journal Nature.

They used a pioneering technique to estimate the age of quartz crystals falling in from the surface into the cave sediments where Little Foot was found. Professor Granger’s result was soon accepted as the definitive age of Little Foot.

However, this result if correct, would make Little Foot older than Australopithecus afarensis hominids from east Africa, which include the 3.2-million year old fossils of “Lucy”.

Lucy is generally considered to be our ancestor. If 3.7-million years is correct, Little Foot would be an alternative candidate species from which we could have evolved, with implications for the exact location of our birth place in Africa.

In addition, the fossils of Little Foot would then be at least a-million years older than other dated hominin fossils in the Cradle of Humankind, contradicting earlier age estimates.

“Using the same data as Granger, in this latest research Kramers and Dirks have now shown with new calculations and interpretations that Little Foot cannot be older than 2.8-million years,” said the UJ in a statement issued by Therese van Wyk from the Media Relations Division of Institutional Advancement.

“In their analysis, they looked at the age of quartz crystals that accumulated directly around the fossils, but falling in from a now-eroded cave chamber higher up, not from the surface. If correct, this means that the generally accepted sequence of hominids remain unchanged.”