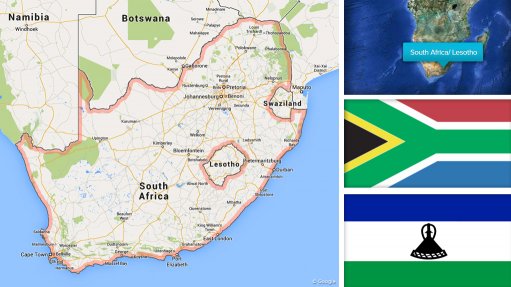 Oversight Authority
The Lesotho Highlands Water Commission has an oversight function, is the channel of government’s input into the project, represents and advises the two governments, as well as monitors the activities of the LHDA.

Project Description
Phase II of the LHWP builds on the 2003 completion of Phase I, which supplies water to Gauteng and uses the water delivery system to generate hydroelectricity for Lesotho.

Phase II of the LHWP will be implemented in terms of two distinct components: a water delivery system to augment the delivery of water to South Africa and a hydropower generation system, which will increase the current electricity generation capacity in Lesotho.

Polihali dam
The Polihali dam will be constructed as a concrete-faced rockfill embankment, with a side-channel spillway about 164 m high.

Polihali to Katse tunnel
An estimated 38-km-long, nominal bore 5-m-diameter Polihali–Katse dam tunnel will be constructed to transfer water from the Polihali reservoir to the Katse reservoir.

Advance infrastructure
Phase II will require extensive infrastructure development before the mobilisation of contractors for the two main water transfer works contracts of the Polihali dam and transfer tunnel. Where possible, the existing infrastructure constructed in Phase I will be used. This includes access roads, power supply, telecommunication systems and camps. Significant additional works contracts will be awarded for the construction of all-weather access roads, a bulk power supply network, telecommunications systems and project housing, as well as labour camps on both ends of the transfer tunnel.

A permanent housing development will be established near the Polihali dam and transfer tunnel, which will consist of project offices, and residential and community facilities.

The Polihali intake site will use the infrastructure employed to construct the Polihali dam and the transfer tunnel. This includes feeder roads and bridges around the reservoir to connect affected communities, power supply systems, construction camps and communications. The infrastructure at Katse dam and in the Matsoku valley will also be available for the Polihali–Katse tunnel construction. Existing accommodation facilities will be used to house consultants and construction management teams. Improvements to the water and sewage treatment plants, clinic and lodge will also be undertaken.

Other infrastructure
Other access and feeder roads will be built around the reservoir to connect affected communities using pedestrian and light-vehicle bridges, while a pair of major road bridges will be built over the Polihali reservoir, at Mapholaneng, crossing the Khubelu river, and near Mokhotlong, crossing the Senqu river.

The programme comprises baseline studies completed in 2013 and 2014, including studies pertaining to environmental flow requirements, and biological and archaeological (including heritage) aspects, as well as socioeconomic and public health studies. It also includes environmental- and social-impact assessments (ESIAs), and the implementation of the subsequent environmental and social management and action plans. These are in progress.

Social development programmes
These programmes, mitigation measures, resettlement requirements and baseline studies, as well as public relations/community engagement and awareness campaigns, will be implemented. The full extent of these measures is being studied and discussed.

The design of these programmes is being informed by the outcome of the baseline studies. The resultant sustainable development programmes to be designed and implemented will be agreed on with the affected communities.

These should include a market study, an integration study, geotechnical investigations, and legal and commercial arrangements. The additional feasibility studies will explore alternative viable hydropower generation schemes that will increase electricity-generation capacity in Lesotho, which will assist in meeting the country’s electricity requirements.

Potential Job Creation
Based on what transpired during the implementation of Phase I of the project, more than 3 000 jobs are expected to be created at the height of the construction phase of the main works of Phase II.

Value
As per the December 2017 long-term cost plan, the cost of the Phase II water transfer component at the date of project completion in 2025 was estimated at R24-billion. The cost of the hydropower component is yet to be established.

Duration
Completion of the project, initially slated for 2020 as per the times suggested in the feasibility studies, is now expected in 2025, based on the current project programme compiled by the Project Management Unit at the start of the project in 2013.

Emphasising the need to take concrete measures to bring to realisation the policy decision to ensure that contractors registered in Lesotho and South Africa equally share the monetary value of all infrastructure works, the Ministers have further reaffirmed the key tenet that all procurement processes for the project should foster competitiveness, transparency, cost effectiveness and quality.

Additionally, the commitment towards the empowerment of Lesotho contractors and previously disadvantaged entities from South Africa to ensure that these can, in turn, effectively compete with multinationals, has also been reaffirmed.

Underscoring the need for creating opportunities and encouraging subcontracting to smaller local contractors under lead contractors, the visit highlighted that these lead contractors will be given specific targets for mentoring and capacitating small companies to the extent where they are sufficiently capacitated to effectively compete with counterparts throughout the water value chain.

Further, the need for succession planning and building capacity for sustainable operation and maintenance of the physical structures created by the project has also been highlighted, whereby the Ministers have tasked officials to develop concrete programmes for capacity building and the assessment of the impact of that intervention.

Key Contracts and Suppliers
To date, several contracts have been awarded for various elements of the advance infrastructure works. These include:

Contract 3004: Professional services for the planning, design and construction supervision of the Polihal western access road (PWAR).
The LHDA awarded the contract to AECOM SA, together with Lesotho-based subconsultants AECOM Lesotho and RWB Consulting Engineers in August 2016. The tenders for the construction of the PWAR are expected to be advertised in the second quarter of 2018.

Contract 3008: Professional services for the bulk power supply and telecommunications.
The contract was awarded in August 2016 to Plantech-SM JV. The procurement of the contractors for the construction and relocation of power lines is expected to take place in the first half of 2018.

Contract 3009: Professional services for the planning, design and construction supervision of housing and associated infrastructure.
The contract was awarded in June 2015 to Polihali Infrastructure Consultants – a JV comprising South Africa-based engineering consultancy Mott MacDonald and Lesotho-based Khatleli Tomane Moteane. The evaluation of the tenders for the construction of the infrastructure civil works (this includes roads, water and wastewater systems, electricity and telecoms supply) is nearing completion. It will be followed by the advertising of the tender for the construction of houses, the lodge and operation centre.

Contract 3014: Professional services for the design and construction supervision of the Polihali north-east access road.
The contract was awarded in April 2015 to SMEC-FMA JV, comprising the Bloemfontein branch of international engineering consultancy SMEC and Lesotho-based civil engineering firm FM Associates. Procurement of the contractors has started, with the tender having been advertised in the last quarter of 2017.

Contract 3015: Professional services for the evaluation, optimisation and site supervision of geotechnical investigations.
The contract was awarded in May 2015 to consultant Jeffares & Green (now called JG Afrika) and Lesotho-based GWC Consulting Engineers.

Contract 3017: Professional Services for the demarcation of the Polihali reservoir.
This entailed the construction of more than1 300 beacons to mark the 230 km perimeter of the reservoir.

The contract was awarded in April 2015 to Lesotho-based consultancy Maleka, Ntshihlele, Putsoa JV.

The reservoir demarcation was completed in December 2015.

Contract 3022: Professional services for the design and supervision of the Polihali diversion tunnels.
The contract was awarded in October 2016 to MSKC JV. The procurement of the contractors for the construction of the diversion tunnel started in the last quarter of 2017 and the tender closed in the latter part of January 2018.

Contract 4016: Geotechnical investigation works for the Polihali dam and Polihali–Katse Transfer tunnel.
The contract was awarded to geotechnical drilling company Diabor in November 2015. The investigations will take place in two stages. The first was completed early in 2017 and the second is under way, following the appointment of the dam engineer in late June 2017.

Contract 6004: Professional services for the environmental and social-impact assessment for the Polihali western access corridor.
The contract was awarded in October 2016 to a JV comprising the Environmental Resources Management (ERM) Southern Africa and Lesotho-based Sechaba Consultants.

Contract 6010: Professional services for the development of a Phase II safety, environment and quality management framework.
The contract was awarded in October 2016 to Rori Management Consultancy.

Contract 6014: Professional services for the environmental- and social-impact assessment for the Polihali reservoir and associated infrastructure.
The contract was awarded in August 2016 to a JV comprising ERM Southern Africa and Lesotho-based Sechaba Consultants.

Contract 6015: Professional services for the resettlement planning and implementation: Polihali site establishment and reservoir area.
The contract was awarded to the LIMA Thaha JV in September 2016.

The advance infrastructure will be largely completed before the start of the main works in 2020.

On Budget and on Time?
Water delivery is expected to begin in 2025 based on the current project programme. It is too early to comment on the hydropower component, as its exact form is still to be determined by the ongoing feasibility studies.