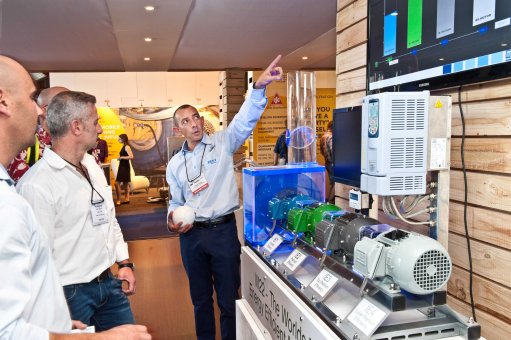 Electric motors manufacturer Zest WEG Group says the uptake of new efficiency-increasing technology in the local electric motor manufacturing sec- tor has been slow, owing to the lack of regu- lation and legislation.

Therefore, to reduce energy consumption while raising the standard of efficiency for such products, many countries have introduced legislation.

Unfortunately, Labuschagne laments that the South African lawmakers have not kept up with this trend; subsequently, the pace of innovation in the electric motor manufacturing sector tends to be slow.

He adds that this has also meant that many industrial plants, sites and commercial spaces have not been able to implement energy efficient systems. Owners and users of these suboptimally efficient motors are guilty of unnecessarily high-energy consumption and overspend on grid-supplied power.

However, Labuschagne points out that not all manufacturers have taken a laissez faire approach towards efficiency optimisation. Zest’s continuing research and development, funded by investments of 2.8% of WEG group’s yearly turnover, has enabled the company to manufacture and distribute high-quality products that conform to international efficiency standards.

“By replacing the IE2 motors with more efficient IE3 motors, consumers are not only saving money in the long run but also reducing the environmental impacts on their operations,” he tells Engineering News.

Labuschagne stresses that buyers should be aware that electric motors have varying efficiencies and, as a result, the operational costs of these motors will differ between manufac- turers and models.

Therefore, to make the choice clearer for prospective buyers, the Zest marketing team has designed and constructed two demonstration units that can depict accurately and clearly the difference in energy consumption and yearly operational costs between generic electric motors and the Zest premium efficient electric motors.

Labuschagne mentions that the level of savings offered by the new motors is such that replac- ing the older generic motors with the new line of IE3 motors would be a cost-saving endeavour, as the monthly savings generated by the motors will exceed the purchase price in less than a year.

“The IE3 electric motors have been designed and built for the African market, as they boast features that would not be found on similar products in European markets. The ingress protection has been increased to IP66, a patented W3 shaft seal has been included, insulation has been upped to Class H and the motors are 100% variable speed drive compatible,” he elaborates.

Moreover, Zest’s confidence in the new line of motors is reflected in its extension of the guarantee period to five years. The Zest WEG Group also supplies IE4 motors, which consume power even more efficiently than IE3 motors, upon special request, says Labuschagne.

Zest is preparing to exhibit demonstrations of its range of motors at Nampo and WISA – both taking place next month – and at Electra Mining Africa taking place in September.