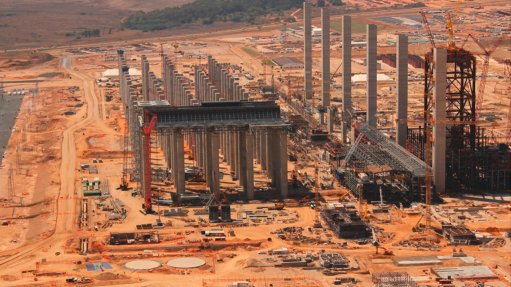 Eskom needs to repay long-term loans in the next two to five years, totalling about R104-billion, and Jaffer argues that, if Medupi and Kusile were fully operational by 2014 and 2017 respectively, as had been planned, the incurred debt would have been paid through normal cash from operations.

However, Medupi is expected to be on line only by 2020, with Kusile due for completion only in 2021.

Jaffer maintains that some of the large overseas contractors working at Medupi and Kusile are to blame for the late delivery of the power stations, as some of these companies had underestimated the work that needed to be done and, as a result, they did not dedicate their best skills base to the projects.

Construction on the power plants started during a busy period of power procurement worldwide because South Africa, too, does not have the capabilities to build these types of megaprojects, Eskom was at a disadvantage as the best power plant construction personnel were not being allocated to South Africa by international firms, he laments.

Jaffer admits, however, that in-house issues, such as strikes and management instability, have also curtailed the progress of the two megaprojects, but asserts that appointing CEO Brian Molefe and CFO Anoj Singh has helped to stabilise Eskom’s operations.

Crookes previously noted that several actions had been taken to transfer the lessons learnt from the much-delayed commissioning of Unit 6 at Medupi to the other five units, which will be introduced in stages from 2017 to 2020.

Unit 6 first began supplying power into the grid in March and has been producing at full capacity of 800 MW since May.

Although Jaffer says the lessons learnt at Medupi will also be transferable to Kusile, he reiterates that Eskom faces real difficulties because it does not have cost-reflective tariffs. He argues that the all-in tariff of about 70c that users pay to Eskom should be increased by up to 50% to between 95c and R1.05 to truly reflect the cost of power generation.

However, the National Energy Regulator of South Africa, having sanctioned an 8% tariff cap in June, did not allow Eskom to move towards a cost-reflective tariff as requested by the utility; government’s equity injection of R23-billion was not enough to cover the power utility’s shortfall.

The multiyear price determination revenue shortfall of R225-billion up to March 31, 2018, would seriously impact Eskom’s equity as significant losses would be incurred during this period due to a noncost reflective tariff, declares Jaffer.

Eskom announced last month that it might have to resort to selling bonds and incurring long-term debt from development banks to counter its financial shortfall.