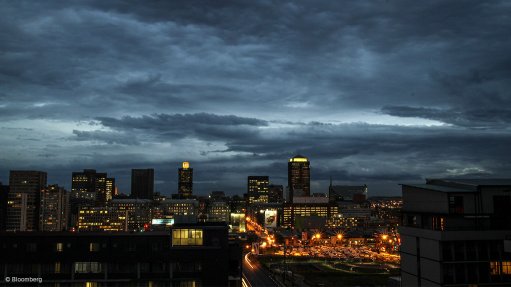 The City of Johannesburg cannot continue accepting its projected 1.6% economic growth rate, as it will not be able to reverse the high rates of unemployment, Johannesburg mayor Herman Mashaba said on Wednesday, adding that the city needed to achieve a minimum of 5% economic growth by 2021.

During his State of the City address at the Council Chambers in the city’s central business district, Mashaba pointed out that Johannesburg had 862 000 unemployed people, with an unemployment rate of over 30%.

The youth were the greatest causalities of this crisis, facing an unemployment rate of over 50%. “Too many of our residents remain without the dignity of work and [are] incapable of supporting their families,” he stated.

“I am angry that a government could justify spending money on lesser priorities while our people are subjected to the most desperate conditions in informal settlements and their dignity is being trampled on,” he said of the previous administration, noting that “shameless looting” had placed the city in dire straits.

Over 300 cases of corruption were currently being investigated, valued at around R10-billion. “This figure is utterly sickening. This level of corruption could not have taken place in a vacuum. It is without doubt that many a blind eye was turned in leadership.”

However, Mashaba highlighted that, since his inauguration in August, the city achieved an allocation of R49-million to its waste management services Pikitup for additional cleaning shifts, employing an additional 640 residents.

A further R5-million was allocated towards the completion of a shared industrial production facility in Alexandra, which will assist small and medium-sized enterprises (SMEs) operating in the informal manufacturing sector.

“We want Johannesburg to be the engine room of South Africa’s economic growth. This cannot happen at the current projected growth rate,” he reiterated.

As such, the city would continue to focus on small business development, aiming to more than double its SME hubs to 14 by year-end, which will increase the number of SMEs supported through each hub each month to 1 250 by June 2018.

Looking ahead, Mashaba outlined his ten-point plan for the city to enable further economic growth, while erasing the challenges brought on by the city’s previous administration.

HOUSING
Having inherited a housing backlog, conservatively estimated at 300 000 units, and an average delivery of only 3 500 housing units a year, Mashaba noted that it would take around “a century” to resolve the backlog.

Since August, the city increased its funding to the Johannesburg Social Housing Company to R219-million, dedicated to buying buildings that will be refurbished within the inner city and converted into low-cost rental stock that will house 1 164 families.

A further R2-million was allocated towards the construction of homeless shelters.

The City of Johannesburg now plans to make its completed housing list, bearing the names of 152 000 residents, public. This will ensure that “anyone can query their position on the list, and know where they stand”. It will also improve the handover of title deeds, with the new administration having handed out 2 800 since August, with another 1 100 to be handed out this month.

Further, the city plans to complete 1 841 unfinished housing units in the current financial year, allocating R546-million to fund the electrification of these incomplete housing units.

POWER CONNECTIONS
Although it was facing a R69-billion electricity backlog, the city had allocated R41-million to electrify five informal settlements, “where children have never studied with even the assistance of a light.”

Further, 1 000 households in Meriting and Finetown informal settlements will be electrified during the year.

“Upon the completion of the R24.5-million project, the families of Meriting and Finetown North will be able to light and warm their homes against the coming winter, and these two communities will be less vulnerable to tragic fires.”

ROADS
With the city facing a reported repair and maintenance backlog on its road networks exceeding R5-billion, Mashaba noted that he had “declared war” on potholes and prioritised the repair of failing road surfaces.

An additional R88-million has also been allocated to the Johannesburg Roads Agency to procure materials and personnel to undertake vital repairs.

“I am pleased to announce that, following our adjustment, in the month of March alone, an impressive 17 696 potholes were repaired,” Mashaba pointed out.

BILLING
Another area of improvement Mashaba would focus on was revenue collection. “Our reality is that we have to collect more revenue,” he said, adding that, during March, R3-billion was collected, against a budgeted amount of R2.6-billion, owing to an outbound collection unit, which was reconstituted after the removal of an external contractor, collecting R275-million.

The city aims to reach the R4-billion mark in monthly collections by the end of July; however, with over 48 000 open billing queries, of which 26 000 are 90 to 365 days old, it will remain challenging.

To attend to this matter with urgency, the City of Johannesburg reconstituted its Back Office Unit within the revenue department and made provisions for overtime so that they can resolve the open queries, having started working on April 3.