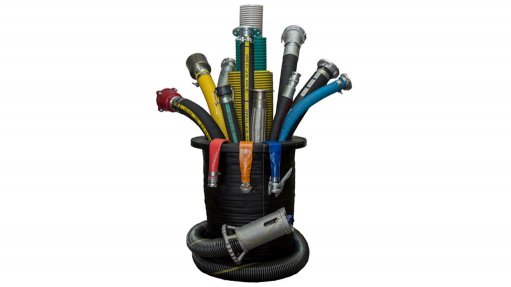 Industrial hose and allied products provider Chick Henderson is propagating and successfully executing transformation, and is reaping the benefits of implementing these ideals.

Established in 1968, Chick Henderson will celebrate its fiftieth anniversary during the year. Chick Henderson Benrose branch manager Robert Dye enthuses that the founder, John Hamilton Henderson, built the company and its culture on moral, inclusive, upstanding principles that mirrored his own.

In October last year, Chick Henderson’s holding entity, Winhold Group, became 100% black-owned when Zola Fubu, whose involvement in the group spans a decade, acquired a 100% equity interest in the group.

The company’s latest black economic-empowerment (BEE) certificate demonstrated a Level 5 BEE score. Dye indicates that this transformation on a management level holds much weight, and will greatly assist in breaking the “difficult” barrier of ascending to the next level.

Following the change in management, the company is vetting for a new BEE scorecard.

Dye notes that parastatals have exerted much pressure on the group to reform over the past few years. The group searched for a number of years to find the correct partner and, finally, Fubu was presented as the ideal fit.

“It is critical for the existence of the group and the company going forward to comply to transformation standards for growth purposes.”

However, Dye emphasises that, while the company has transformed in response to this demand, to ensure long term sustainability for the company, this is not the sole determining factor for pursuing transformation. Rather, the company perceives transformation to be the correct ethical course of action, and would pursue it of its own prerogative, regardless of outside pressure.

Moreover, he reiterates the importance of 100% black ownership, as he believes this will change the corporate structure. “Corporate culture can change things only to a certain point, after that, change needs to occur from the top down.”

Dye stresses that these transformation strides are not artificial – each person appointed must have long- term exposure to the industry, and be an individual who will benefit and complement the company. “You cannot build a house on a bad or unstable foundation, there has to be long-term training of all staff and a focus on their development in positions.”

This has been successfully executed by the company, with several staff members moving through the ranks to reach a very high level in the company structure, owing to their trustworthiness, and characteristics that match the company’s culture.

Dye also highlights a trend in recent years, where young, energetic black professionals who have reached the ceiling in corporate environments want to enter the hose industry. The company has been assisting such entrepreneurs by providing a starting point and supporting their development in such endeavours.

Moreover, he posits that this is an initiative that the hose industry should be focusing on in pursuit of transformation.

“The hose industry is currently not very transformed, as it is small in comparison with other industries and is not as formalised.”

Company growth manifested in a new and bigger distribution centre to which the company will move by May this year, to streamline in-house and external efficiencies and service to the market.

The centre will combine two existing facilities in Benrose, Johannesburg – the head office, as well as the bulk receiving area and assembly facility. It will be located about 5 km away from the current Benrose facilities, as the company is happy to remain in the area, with customers still able to find it easily.

Dye explains that the hose market is overtraded, which leads to market saturation of inferior imported products and, therefore, the service levels of companies is what positions them as preferred suppliers.

The company will benefit by better managing ineffi- ciencies, and the associated costs.

Feedback from the company’s supply chain exhibits “very positive indicators”. The company has begun marketing the move directly to customers as of this month, with a dedicated social media campaign.

“This is a very exciting time for the company. We have new ownership; our fiftieth anniversary is approaching; and we have a new distribution centre opening soon, that may well position us for the next 50 years to come.”