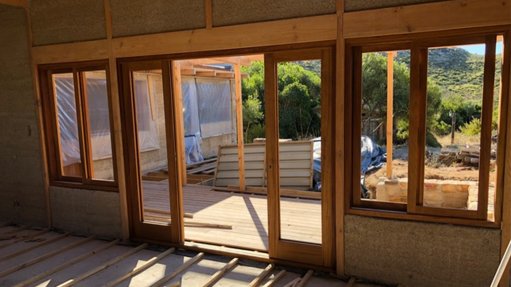 SUPERIOR BENEFITS Hemp boasts several characteristics that make it superior from an ecological and economic perspective
Photo by: Wolf

Hempcrete is a fully biodegradable material that comprises hemp hurds – the woody core removed during processing hemp – lime and pozzolanic additives, which is then cast in situ between formwork.

Hemp is used in the building industry as “hempcrete” or as fibre for quilt insulation and more recently there is a growing hemp board industry.

In addition to the insulation benefits, including acoustic insulation, hempcrete has carbon sequestration properties, meaning that about 108 kg of carbon dioxide (CO2) can be locked away as biomass per cubic meter of hempcrete for the life span of the building.

Carbon sequestration refers to the process by which CO2 is removed from the atmosphere and held in solid or liquid form to mitigate or reverse global warming.

Hempcrete also offers protection against, and is, fire- and mould-resistant. It is also moisture absorbent, which means that 1 m3 of hemp can absorb up to 14 ℓ of water.

Wolf highlights that, of all the plant fibres used in construction, hemp boasts several characteristics that make it superior from an ecological and economic perspective, namely hemp’s speed of growth, its ability to revive denatured soils when utilized as a rotational crop, and its multitude of uses in the building industry and elsewhere.

Multiple layers of different materials are used in conventional wall-construction techniques, with each layer performing only one specific function, he adds.

For example, a steel-framed structure with a composite wall system requires an insulation layer, a vapour barrier layer, a breather membrane and a sheathing layer, as well as the finishing cladding, besides others.

“A hempcrete wall can perform all of these functions and, owing to the reduced number of connection points between these materials, a more air-tight envelope can be achieved.”

However, hempcrete is not a concrete. It is used as an infill walling system between other structural elements.

The demand for this type of building material is increasing in South Africa, however, owing to the cultivation restrictions that are in place, hemp is currently being imported, making it more costly to use when compared to other building materials.

It is illegal to cultivate hemp in South Africa, as it is classified under the Cannabis species. Wolf explains that a permit is required before one can plant hemp and this permit is obtained from the Department of Health under the Medicines Control Council.

President Cyril Ramaphosa stated in his State of the Nation Address in February that the country will, from this year, regulate the commercial use of hemp products, providing opportunities for small-scale farmers, and formulate policy on the use of cannabis products for medicinal purposes, to build this industry in line with global trends, notes Wolf.

Recently this process was started by the Minister of Health signing legislation that removed the Cannabis plant and especially low Tetrahydrocannabinol hemp for industrial purposes from the Medicines Control Act and this is a major step towards creating a legitimate hemp industry in South Africa, says organic store Hemporium director Tony Budden.

“We are now waiting for the Minister of Agriculture to create a framework around the cultivation of Cannabis and for the Department of Justice to amend the Drugs and Drug Trafficking Act in order for this industry to be regulated and legal. We are hoping that this happens in time for planting season in September otherwise South African farmers and the local hemp industry will fall behind by another year."

In the President’s address, it was also pointed out that the regulatory steps “will soon be announced by the relevant Ministers”.

Wolf explains that regulating the policies for hemp cultivation will provide several benefits for industries such as the construction and textile industries, adding that the cultivation of industrial hemp has the potential to substantially grow the local economy and provide sustainable jobs.

“In the South Africa context, where we have a suitable climate and much open land, industrial hemp could be cultivated and harvested in abundance with relative ease. It grows quickly, and requires little water and no pesticides or herbicides, as it is inherently pest-resistant, so its cultivation can be completely toxin-free. It can even contribute to the phyto-purification of previously contaminated soils.”

Meanwhile, Wolf and Wolf Architecture has been involved in several hemp-related construction projects. The company works with Hemporium, which has been pioneering the legalisation of growing hemp in South Africa for the last 21 years. Currently they import hemp and hemp products to South Africa.

One of the projects included a soup kitchen in Khayelitsha, Western Cape, where the company collaborated with packaging supply store GreenHome and Hemporium.

Wolf comments that he hopes to see this soup kitchen “grow into a second building, with increasingly integrated social, food and income-generating systems”.

“Having built and been involved in several hemp-built homes and, more recently, larger building projects, we understand the benefits and limitations of this material. The benefits to personal and environmental health are substantial, and for this reason, hemp is our material of choice for non-load-bearing elements,” concludes Wolf.