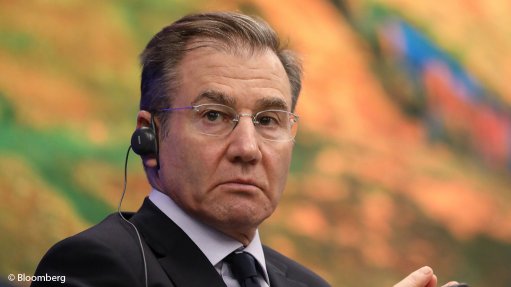 “This reflects both the ability and dedication of our teams to adapt to these difficult conditions,” said Glencore CEO Ivan Glasenberg.

“It looks like Glencore marketing has had an exceptional first half,” UBS global research analysts stated in a ‘buy’ note on the company.

“We also see potential for Glencore to positively surprise with its first-half results on August 6,” the analysts added.

In a release to Mining Weekly on the company’s production, Glasenberg said that as a responsible operator, the London- and Johannesburg-listed company’s top priority has been to protect the health and safety of its people and the communities that host its businesses.

“Although some of our industrial operations were temporarily suspended in line with national and regional guidance, or where our risk assessment determined a suspension was appropriate, the majority of our assets continued to operate relatively normally.

“I’m particularly pleased to report a strong operational performance at Katanga, with its ramp-up on track to achieve design capacity by the end of the year,” he added.

“A very strong first-half performance allows us to now raise our full year 2020 earnings before interest and tax (Ebit) expectations to the top end of our $2.2-billion to $3.2-billion guidance range.

“In the near-term, we remain alert to the continuing challenges that Covid-19 presents. While we expect our operating cash flow to remain solid, we are ready to adapt to changing market conditions.

“While the majority of our assets continued to operate through the second quarter with minimal disruption, certain operations were temporarily suspended, on account of mandatory governmental lockdown provisions, or otherwise where a risk assessment determined such action appropriate,” Glasenberg said.

First-half marketing performance was “very strong”, with full-year Ebit expectations now raised to the top end of its long-term $2.2-billion to $3.2-billion range.

Contributing towards first-half Ebit was a sizeable increase in carried inventory – ‘carry trades’ – transactions/quantities (although the overall dollar value of inventories was somewhat lower than December last year, owing to lower commodity prices, and also a build in net working capital, on account of the varying terms of trade in respective business units.

“In particular, our oil department, which in recent years has managed its receivables portfolio days on hand to around 20 days and accounts payable around 45 days, saw a significant reduction in its net payables position – payables less receivables – via the sharp reduction in oil prices, as well as lower sales volumes due to weaker product demand in H1 2020."

Together with the initial cash margining required to give effect to the additional ‘carry trades’, this has led to a net-debt increase as at June 30.