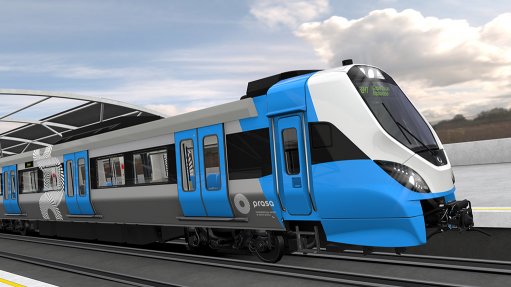 Some 18 months after the financial close of a passenger train supply contract between the Passenger Rail Agency of South Africa (Prasa) and Alstom subsidiary Gibela, the State-owned firm has welcomed the arrival of the first test train aimed at replacing the old Metrorail train fleet over the next 20 years

The train, which was this week delivered to Prasa’s Wolmerton depot, in Gauteng, was the first of a planned 600 trains that would be configured as six-car sets able to transport 1 346 passengers.

The local manufacturing plant would, according to Gibela, achieve an average of 67% local content over the delivery period, increasing to 75% local content by year ten.

Prasa kicked off its R172-billion investment in the acquisition of modern passenger trains and the support infrastructure in the 2013/14 financial year with a view to replacing the existing Metrorail rolling stock over a ten-year period.

“This government is committed to the transformation of passenger rail infrastructure and in ensuring that rail becomes the backbone of public transport and a mode of choice for the multitudes of our people who depend on affordable, reliable and safe public transportation.

“This train is the realisation of government’s investment on the rolling stock fleet renewal programme. Our government is serious about implementing infrastructure and rail transport programmes as spelled out in the National Development Plan (NDP). Transport is one of the key pillars of the NDP,” Transport Minister Dipuo Peters said in a statement.

Prasa chairperson Dr Popo Molefe added that the arrival of the first test train signalled the start of the modernisation of passenger rail infrastructure and services.

“We are in the process of building modem rolling stock that will form the backbone of a world-class metro service that is safe, reliable, and affordable.

“This investment by the government demonstrates its commitment towards developing a high quality transport system. Prasa is serious about delivering on its mandate. We aware of the enormous responsibility entrusted upon us and we intend to meet and exceed our customer and stakeholder expectation,” he commented.

The first train had been specifically designed to act as a test train and would undergo “key testing”.

As a result, it did not feature commuter train fittings, such as chairs, but would have exposed electronic panels exposed, while basic structural fittings would be marked for ease of reference during testing .

All data gathered from the seven-month testing programme, which would start in the new year, which would be used to validate the train’s safety, design and performance parameters .

A second test train had been planned for delivery within the first quarter of next year. Each of the two test trains would arrive with updated fittings, in line with the various stages of testing by Prasa and Gibela engineers.

These tests would also facilitate the accurate manufacturing of the initial trains made in Brazil and create a proven methodology for the balance of the trains, which would be manufactured in South Africa.

“Gibela is quite pleased with the delivery of the test train, which was a collaborative effort between ourselves and Prasa.  .

“The final journey to the Wolmerton depot will mark the start of a series of tests on the train, transferring skills and the training of new train drivers, as we continue to manufacture the new Metrorail trains” said Gibela CEO Marc Granger.

The new metrorail trains would offer a 31% energy-saving compared with the current trains and a design life of 40 years.