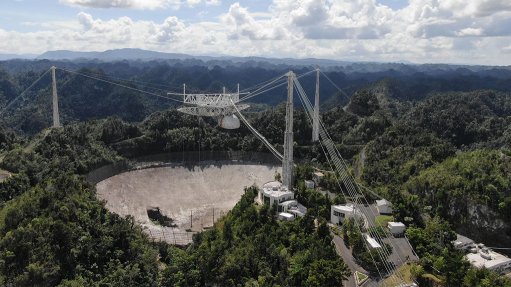 A recent photograph of the Arecibo radio telescope; the damage to the dish is clearly apparent
Photo by: University of Central Florida

The US National Science Foundation (NSF) has announced that the world-renowned Arecibo Observatory, in the US territory of Puerto Rico, is to be decommissioned after 57 years of operation. The decommissioning is the result of structural weaknesses that have been discovered after a support cable broke in August. For 53 years, the fixed Arecibo radio astronomy dish was, with a diameter of 305 m, the largest single-aperture telescope in the world. It was only eclipsed in mid-2016 when China’s 500-m-diameter Aperture Spherical Telescope was commissioned.

Currently managed by the University of Central Florida (UCF), the Arecibo dish is located in a natural hollow. Its dish is spherical, not parabolic, and a 900 t instrument platform is suspended some 137 m above it, by cables connected to three towers. The instrument platform gave the telescope a limited ability to steer radio beams, allowing the telescope to cover a 40˚ arc of the sky above it.

In August, an auxiliary support cable “detached” from its tower and smashed into the dish below, leaving a gash some 30 m big. The NSF authorised the engineering analyses that were the prerequisites for repairs. These were still under way when, early this month, a main cable, connected to the same tower, broke, inflicting more damage on the dish.

That main cable should not have failed. The stresses to which it had been subjected should have been well within its design parameters. Subsequent analysis established that the 76 mm main cable had failed at only 60% of its expected minimum breaking stress during calm weather.

This discovery led to the other cables, both main and auxiliary, being examined. Significant slippage was found at several of the sockets which held the remaining auxiliary cables (which had been installed in the 1990s, as part of a refit of the telescope that had increased the weight of the instrument platform). As for the main cables, which were part of the telescope’s original structure, new wire breaks were found on some of them.

The engineering firm hired by UCF to lead the inspection and repair work on the radio telescope, Thornton Tomasetti, advised that repair work would be too dangerous to carry out. “Although it saddens us to make this recommendation, we believe the structure should be demolished in a controlled way as soon as pragmatically possible,” stated the company in its recommendations letter. “It is therefore our recommendation to expeditiously plan for decommissioning of the observatory and execute a controlled demolition of the telescope.”

The UCF forwarded all these assessments to the NSF, which, in turn, engaged yet another engineering company, as well as the US Army Corps of Engineers (which has large civil engineering project responsibilities in the US), to provide further independent assessments. The company also endorsed the findings and recommendations of Thornton Tomasetti. The Corps of Engineers proposed collecting more photographic evidence from the telescope and carrying out a complete forensic examination of the broken cable.

Given the risks to personnel, the NSF decided to accept the recommendations of the majority of the engineering entities consulted about the telescope. Other facilities located at the Arecibo observatory will remain in operation. Over its life, the radio telescope at Arecibo became part of American, and indeed, wider, popular culture. It featured in a number of TV series and films, including Goldeneye and Contact.