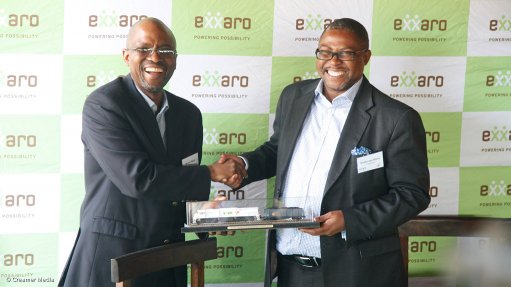 The agreement will also enable the GG6 expansion of Exxaro’s Grootegeluk coal operation in the Waterberg area, which requires rail capacity to RBCT.

Speaking at the signing ceremony, Exxaro CEO Mxolisi Mgojo noted that the company would invest 50% of its R20-billion coal capital expenditure programme over the next five years in the Waterberg area.

“The R10-million investment is a milestone, as it comes at a time when the mining sector is not investing [in projects], he said. The signing of the contract follows the completion of the first phase of the Waterberg Expansion Programme in 2016, which included a 1.8-km passing loop, enabling 100-wagon trains to cross without disrupting other rail operations on the line.

“The agreement is a key contribution to the Waterberg expansion programme, earmarked in the National Development Plan as a strategic coal mining area and national asset to growing the South African economy,” said Mgojo.

The new agreement will also see the collapse of the old contract between Transnet and Exxaro. “This fresh agreement comes at the time when the Transnet’s Waterberg programme is in full swing, with plans to complete the second phase of the project in March 2019,” noted Mgojo.

Three-million tons of coal will come from the Waterberg once all the project phases have been ramped up.

Mgojo highlighted that Exxaro was proud to be developing the Waterberg area in collaboration with Transnet, noting that it was a realisation of Exxaro’s vision to contribute to the unlocking of the Waterberg, create jobs and power economic development in South Africa.

He added that Transnet had a proven track record in building rail capacity and expanding export rail performance in the Waterberg area and across South Africa.

“This agreement is testament to healthy public–private partnerships. It will also enable Transnet to increase rail infrastructure capacity to service both domestic and export markets from the Waterberg area,” added Mgojo.

Also speaking at the signing of the agreement, Transnet CEO Siyabonga Gama said that there had been a confluence of world events that made the growth of the Waterberg region almost inactive.

“The fall in commodity prices plays a major role in that. Coal economics is vital in how we deal with coal going forward. As we continue to search for cleaner power and ways to clean coal, we need to ensure that we sustain the coal industry,” he said.

Gama stated that the new agreement was key to improving rail infrastructure in the Waterberg area, which included the strengthening and expansion of the Waterberg link, known as the Lephalale Line.

“We are a key enabler to growing the South African economy and are playing our role in developing more rail capacity and unlocking the capacity of the Waterberg region to domestic and export markets.”