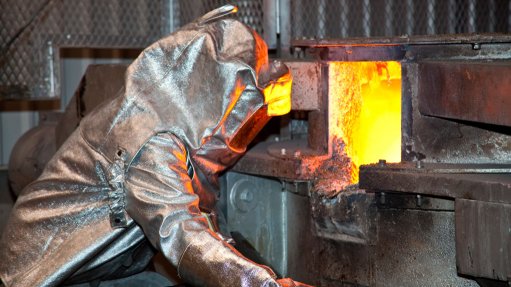 FEELING THE HEAT The increasing depth of the mines in South Africa, combined with the weak rand, is spurring a bigger set of challenges for the industry

South African gold mining production levels are slowly increasing because of the rand:dollar exchange rate, with the R/kg gold price being at its highest level in recent years. The prices are not likely to increase again, but if the exchange rate increases to R20/$1, mines will see an improvement.

South Africa produced about 87% less gold in January 2015, compared with the same month in 1980, with forecasts for 2016 looking even lower.

The gold price, which, as of early February, was $1156/oz, recovered recently for the first time in three years, as investors head back to safe haven stocks, following volatile trading in Chinese stocks, which were attributed to the unstable yuan, says professional services firm KPMG mining partner Daniel Hooijer.

However, the increasing depth of the mines in South Africa, combined with the weak rand, is spurring a bigger set of challenges for the industry, he tells Mining Weekly.

“The challenges facing the gold mining industry include high electricity tariffs, with another electricity price hike a possibility during this year; water restrictions, owing to the severe drought South Africa is experiencing in some areas, as well as the cost of pumping water; labour costs and the increasing social spend required in mining communities.”

Meanwhile, the weaker rand is causing mining inflation to be much higher than that of the consumer price index, as most of the mining equipment used the South African industry is imported.

“All the costs related to gold mining in South Africa have drastically increased over the last two to three years, owing to these constraints, putting strain on mining companies,” Hooijer elaborates.

These challenges, combined with all South Africa’s low-level deposits having been fully exploited, means that gold mining companies are turning away from exploration and the development of new mines in the country to rather focus on metallurgical processes and near mine exploration.

The Buffelsfontein mine, in the North West, owned by mining company Village Main Reef, was closed down in 2013, but AngloGold Ashanti’s Mponeng mine, in Gauteng, is still considered one of the world’s richest gold mines.

Companies, such as inspection, verification, testing and certification company SGS South Africa and mineral filtration services company Enprotec, are focusing on metallurgical processing to improve the use of ore excavated on. This needs to be done responsibly – without water and electricity wastage, but with the correct amounts of cyanide – for the development to be sustainable.

“With the crunch on development and exploration spend, companies are looking to increase the use of already mined ore and other near mine targets, which does not require new infrastructure to access the orebody and mone- tise it,” Hooijer notes.

Exploration and the development of new mines are also becoming more difficult, as mining companies are struggling to access the capital required. Hooijer says investors are apprehensive to invest in gold after the gold price crashed in 2012, declining by 7%, and by 13% in 2013. This resulted in major losses for stakeholders, namely government, labourers, labour unions, communities and shareholders.

The unease of investors led to increased interest rates on returns on investments, which made the cost of capital much higher for mining companies. Investors are now looking for more liquid investments, whereas gold mining is a long-term investment.

“Investors want returns much sooner than what the mines are able to produce,” Hooijer highlights.

As such, mining companies need to engage regularly with all their stakeholders and address their concerns if they want smooth-running operations.

Another challenge mines are facing is the increase in illegal mining activity. Mining companies are losing valuable equipment and working hours, owing to theft and intimidation.

Illegal mining activity – which mostly takes place around hot spots, such as the Matholeville milling sites, in Randfontein; Sol Plaatje open holes, in Kimberley; and the Main Reef road shaft entrance and Durban Deep shaft entrance, both in Johannesburg – is difficult to monitor, as there are thousands of legal workers underground at legally operating mines, as well as illegals at closed down mines in these areas every day. Shafts are being closed up with cement and security guards are stationed at the entrances of abandoned mines, but these efforts are seemingly futile, Mining Weekly has reported.

The amount of gold being lost to these illegal operations is impossible to determine, as it is most likely being smuggled out of South Africa, adds Hooijer.

Meanwhile, the demand for gold jewellery has remained relatively constant, especially in India and China, where it is seen as a symbol of wealth, he says. India and China were the biggest investors in physical gold last year, with 1 120.9 t and 985.9 t being used by each country for jewellery manufacturing respectively.

“As such, there is still value being derived from gold,” Hooijer concludes.