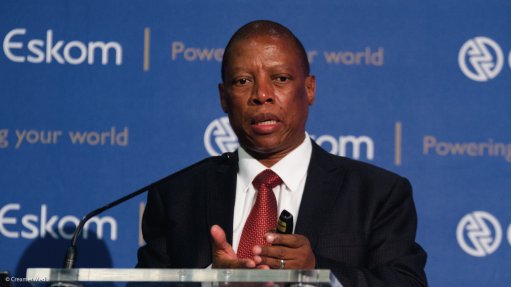 State-owned power utility Eskom spent a massive R10.5-billion on diesel fuel in 2013/14 to enable it to operate its two open-cycle gas turbines (OCGT) in the Western Cape. The expenditure was well up on the R5-billion spent in the prior year and a full R8.1-billion above the R2.5-billion set aside by the regulator in its revenue determination for the period.

Total OCGT production contributed 3 621 GWh of the 230 938 GWh produced by the coal-heavy utility – significantly ahead of a budget of 1 284 GWh, translating to a load factor of over 19.3% and meaning that the plants were operated outside of peak periods for which they were designed.

Eskom’s overall primary energy costs rose to R69.8-billion from R60.7-billion, increasing per unit primary-energy costs by 14.2% to over 32c/kWh. Coal-use costs rose by 0.74c/kWh, while OCGT-use costs increased by a material 2.54c/kWh.

During the period, Eskom increased electricity sales by a marginal 0.6% to 217 903 GWh, while group revenue rose to R139.5-billion, from R128.8-billion. The increase was mainly the result of the 8% tariff increase granted by the National Energy Regulator of South Africa, but was more than offset by a 10.2% rise in operating costs.

The group ended the year with a net profit of R7.1-billion, up from R5.1-billion. But FD Tsholofelo Molefe stressed that, if a replacement value approach was taken, the result would be a net loss of R12.5-billion and a negative return on assets of 1.89%.

Interim CEO Collin Matjila said urgent supply- and demand-side interventions were being considered to reduce diesel consumption, including through an evolving gas strategy.

Eskom was hoping to convert the OCGT plants to operate on gas and was also pursuing purchases of gas-fired electricity arising in Mozambique.

It had already extended a contract to buy power from Aggreko’s temporary power plant in Mozambique and was pursuing other longer-term power purchase agreements.  Sasol is building a 140 MW gas-fired power plant at Ressano Garcia, where Gigawatt was also building a 118 MW plant.

“It is desirable for Eskom to participate in upstream gas activities to expedite the production of unconventional gas such as coal-bed methane and shale gas, which could enable cost-competitive baseload capacity,” Matjila said.

He added that over the coming 18 to 24 months there should be progress on both converting the Western Cape plants to gas and to securing additional purchases from Mozambique.

In the meanwhile, the utility would also pursue other ways to reduce the use of the expensive OCGT, including through additional purchases from independent power producers (IPPs). In 2013/14, the utility purchased 3 671 GWh from IPPs at an average cost of 88c/kWh, which represented a material discount to the cost of OCGT production.