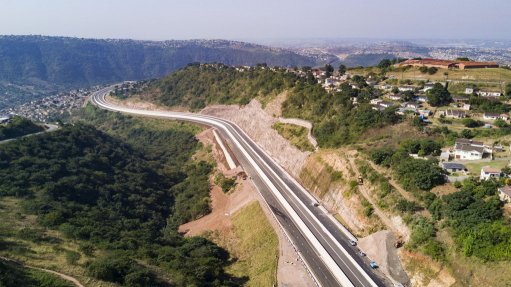 CHALLENGE ACCEPTED The design of MR577 was fraught with technical complexity, as the route climbed along the KwaDabeka tributary of the uMngeni river and into New Germany

Out of the public eye, about 10 km inland from the coastline, the six-lane MR577 is a 14-km-long road that provides a fifth main crossing of the uMngeni river. The route was developed to provide critical access for local residents in the communities of Inanda, Ntuzuma and KwaMashu to jobs and commercial activity in New Germany and Pinetown.

Royal HaskoningDHV South Africa transport, aviation and planning construction management principal Gary Swart explains that north-south transportation in Durban has historically been constrained by the uMngeni river, with a traffic blockage on any of the four existing crossings – the M4, M12, R102 and N2 – resulting in congestion throughout the city. The MR577 will not only help to alleviate this but also offer a second route to King Shaka International Airport, completely independent of the N2.

Royal HaskoningDHV South Africa sector consultant Brian Downie notes that the project has spanned nearly 20 years. It started in the 1990s when the now defunct Department of Cooperation and Development undertook a route location study for a new road; based on this, the KwaZulu-Natal Department of Transport (DoT) commissioned the design of the recommended route.

However, during the design process, Royal HaskoningDHV proposed a higher bridge than the low-level crossing initially conceptualised, which would be a more direct road, reducing the length of the route by about 1.4 km and minimising the steep gradients into and out of KwaDabeka Valley. In 2003, when funds became available to begin construction, RoyalHaskoningDHV was appointed in joint venture with consulting engineers Henwood & Nuxmalo as project and construction managers. Construction started in the north progressing southwards, and construction of the uMngeni viaduct began in 2008.

The Challenge of KwaDabeka Valley Swart highlights that the design of the road was fraught with technical complexity, as the route had to rise at an average grade of 6.2% along the KwaDabeka tributary of the uMngeni river and then into New Germany.

Preliminary investigations indicated varied geology along the route, which tested the ingenuity of the design and construction teams, as the stability of the rock face had to be ensured where conditions varied continuously and it was not possible to apply only one rock-retention solution.

“Designers were literally caught between a rock and hard place, trying to negotiate respect for the integrity of the stream by having the road hug the cliff, while holding back a shattered rock face that was constantly threatening to fall onto the road,” explains Swart.

Further complicating the process was the addition of bus rapid transit (BRT) lanes on the MR577 as part of the eThekwini integrated rapid public transport network.

“It would’ve been difficult and expensive to retrofit a BRT component into the project when it was completed and so the process of engagement began to stitch the two projects together. The decision to proceed with two contracts for separate clients on the same site was possible only because of the cooperative engagement between all parties,” says Downie.

The result was a two-lane: four-lane, split-level dual carriageway, with the dedicated BRT lanes separated from general traffic by reinforced concrete traffic barriers, owing to the curvilinear alignment on steep gradients.

To accommodate the alignment of the carriageways, a rock slope cut at 63º to the horizontal along the eastern side of MR577 was carried out, with resulting cut slopes varying between 15 m and 72 m with many erosion gulleys, Swart notes.

Various protective measures had to be implemented to guard against rockfall from the steep natural slope during this process. Interceptor walls were installed at the crests of the main cuttings using gabion basket structures, which were anchored back into the cut slope, and incorporating guardrail structures in selected areas to increase the height of the interceptor walls.

Steep rock and boulder outcrops were draped with steel mesh to control the downslope movement of boulders. Intermittent tension cracks, observed during construction, were stabilised using rockbolts and anchors.

“The six-lane design, with different geometric requirements and pavement designs, placed immense pressure on the design team. It is testament to the dedication of the whole professional team that at no time did the contractor ever wait for drawings,” notes Downie.

Swart and Downie stress the empowerment aspect of the project, which has assisted in uplifting Durban’s outer-lying communities through not only better access to commercial hubs but also significant skills development initiatives.

In consultation with the KwaZulu-Natal DoT and the MR577 project’s liaison committee, a centre was established to provide construction-related skills training to help members of the surrounding communities use their newly acquired skills to develop small businesses in the area.

The route also features eleven pedestrian bridges that were built by emerging contractors.